Steven Weisman
Steven Weisman is a Masters student at York University in Toronto, Canada studying International Development with a focus on conflict resolution in Israel-Palestine. He is currently an intern at the Palestine-Israel Journal.

When one thinks of visiting Israel as a tourist, one thinks of coming to the home of the world’s three major religions. But Israel today has something more to offer those who want a sense of adventure: a shooting area where you can learn to fight “terrorists.”

Two articles appeared in the past week on Ynet News regarding two different perceptions of the same activity. The first, “Gaza kindergartners want to 'blow up Zionists'”, is about young children being taught to resist Zionist occupation promoting the al-Quds brigade. The other, “Tourists venture to West Bank to 'shoot terrorists'”, is about a shooting range in the Gush Etzion settlement bloc in the West Bank. Here, tourists of all ages learn how to ‘eliminate a terrorist.’ The article goes on to show that even eight-year-olds will learn how to use weapons and to deal with a “terrorist” threat.

What does the juxtaposition of these two articles show us? It’s clear to me that who holds the power defines the legitimacy of each action. Israel as a country which has a professional military force can do these things because they do not support vigilante action. Whereas Gaza, lacking such a parallel force, is viewed as a transgressing generally accepted international norms regarding war and resistance.

Here’s the big difference though. I, as a Jewish Canadian, could very easily attend the course being held at Gush Etzion and carry on with my life without it ever affecting me again. If I went to go visit the Gaza kindergartner, though, I would have attended what would be internationally recognized as a “terrorist training camp.” The double standards exist because those in power define the legitimacy of instruments of force.

Regardless, it is unacceptable for the Israelis or the Palestinians to be indoctrinating their children in this way. It shows a rather sad tale of Israelis dehumanizing those involved in terrorism and Palestinians dehumanizing those involved in the military. Golda Meir once said that “this conflict will end when they love their children more than they hate us”. It seems like the conflict has evolved in another direction: making the children the battleground itself.

Seeing images of children dressed as soldiers, carrying guns, and shooting “terrorists” is the most compelling reason I’ve seen for the longevity of this conflict. No longer is this conflict fought on the field of a common human morality where those confronted with ideas have a space to challenge its assumptions. There is a very big difference between joining the army/resisting at the age of 18 and having the ideas ingrained into you at a young age. The preparation from such a young age displays the lack of faith both sides have in a peace appearing in the near future. Most importantly though, neither side can claim to fight for the future of their children when they happily sacrifice them in the name of the conflict. 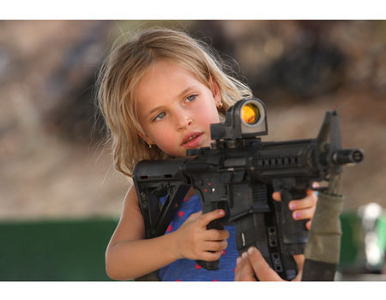