In the course of a conversation with IPCRI co-director Dan Goldenblatt, he made a strong case for his claim. He said that President Abbas was committed to a resolution of the Israeli-Palestinian conflict based upon at two state solution, with a Palestinian state in the West Bank, Gaza and East Jerusalem, living in peace alongside the State of Israel, was against the use of violence, and had ensured that the new Palestinian unity government, the product of the reconciliation agreement between Fatah and Hamas, was committed to the goal of peace with the State of Israel and would stand by all international agreements signed by President Abbas, the PLO and the Palestinian Authority. When asked about the refugee question, he added that although he himself was not a refugee, Abbas was a refugee from Safed, and had no desire to return to his home town, only to visit as a tourist. Al-Masri also ridiculed the statement by Israeli Minister Naftali Bennet that Abbas is a “mega-terrorist”. 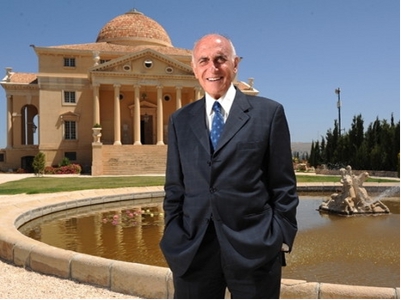 Al-Masri at his home in Nablus

Al-Masri was one of the primary facilitators of the recent reconciliation agreement signed between Fatah and Hamas, a goal he had been working towards during the past seven years. And the fact that he came to Tel Aviv in the midst of the crisis over the kidnapping of the three Israeli teenagers in the West Bank, and the assumption held be the Israeli government that Hamas is responsible, did not make things easy for him. Later in the day, it was revealed that the two suspected kidnappers are known to be members of Hamas from the Hebron area. Yet al- Masri defended the reconciliation as a great achievement, particularly since it was carried out on Fatah’s terms. And he added, the Israelis have always claimed that Abbas only represented half of the Palestinian people. Now he is speaking on behalf of all the Palestinians. He also praised the Abbas’ courage in condemning the kidnapping, in Saudi Arabia no less, while noting that three young Palestinians had been killed by IDF soldiers in the West Bank since then as well.

“Peace in my lifetime”

Al-Masri is 80 years old, just one year older than his friend Abbas, and he declared that he still “wants to see peace in his lifetime”. He said that one of the keys to an agreement was the Arab Peace Initiative,launched at the Arab League Summit conference in Beirut in 2002, in which the 22 members of the Arab League declared their readiness to recognize Israel and have normal relations with it after a Palestinian state is established on the West Bank, Gaza and East Jerusalem, and a “just and agreed upon solution for the refugee problem”, a declaration backed by all 57 Muslim states meeting in Teheran in 2003. As he noted, unfortunately the Arab Peace Initiative has never been placed on the agenda of the Israeli government for discussion and response.

Age seemed to be a major factor in the discussion. Yael Dayan, sitting in the front row, said that she has been seeking peace for many years, and while she herself might not be young enough to be al-Masri’s daughter, her mother Ruth Dayan, who is still active at 96, was old enough to be his mother. And a 25 year old activist said that the older generation had failed to achieve peace, and that she was extremely frustrated by the lack of energy to change things in Israel.

In response to al-Masri’s request for suggestions about what we should do to move things forward, Dayan offered two ideas. The first was to arrange a meeting in the Arab world between Israelis and Palestinians and other Arabs, to promote the Arab Peace Initiative. She noted that she was active in the IPI-The Israel Peace Initiative of Israeli business people and public figures initiated by Koby Huberman and Yuval Rabin, which was an Israeli civil society response to the Arab Peace Initiative. Dayan also expressed the hope that Shimon Peres, after he leaves the presidency in July, will be active in promoting this and other ideas. Her second idea was that a meeting should be arranged for Israelis to speak directly with Hamas people. 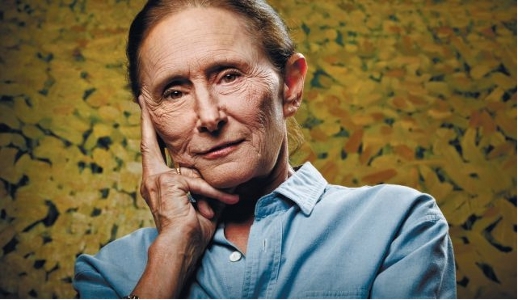 Al-Masri noted that he was a partner in the BTI-Breaking the Impasse initiative, which brings together Israeli and Palestinian business people to promote peace. However, he also said that while he was ready to work with Israelis to help end the conflict, he was not ready to do business with them until the occupation ends.

Concerning the age issue, I said that many veterans were still committed to working to achieve peace, but that we need to work together with the energy of the younger generation, an idea which al-Masri seemed to agree with. However, when I suggested that the leaders of the post-Arab Spring in the Arab world should reiterate their support for the Arab Peace Initiative in direct communication with the Israeli people, the way he and President Abbas himself have done on prime time Israeli TV, he exclaimed that the Palestinians and the Arabs had “done enough”. After-all he said, the Palestinians have expressed a readiness for an historic compromise, to receive just 22% of the land for a Palestinian state, while the Israelis would retain 78% of the historic area for their state.

When I suggested that Yael Dayan’s idea about arranging a dialogue between Israelis and Hamas people was unrealistic, because the Hamas people wouldn’t agree to talk with us, he said that Hamas was essentially an expression of Palestinian suffering, and we should relate to the Palestinian people and leadership as a whole. When another audience member tried to press him on the question of the Hamas charter, which calls for the elimination of the State of Israel (and which hardly anyone, including Hamas people have read), al-Masri quoted statements by Hamas political leader Khaled Meshal, accepting Israel on the 1967 borders.

When al-Masri was asked how he would describe “end of conflict” as the goal, in a way that the general Israeli public would understand, he said, “my image of end of conflict is to see the Israeli flag flying in all 57 Arab and Muslim states”. That’s what we could get if we respond favorably to the Arab Peace Initiative.

“I have a dream” – Netanyahu in Ramallah

The last question went to Eyal Raviv, founder of MEPEACE.Org, another representative of the younger generation. He said that he “came here with the image of al-Masri making a V sign with his fingers at the ceremony announcing the Fatah-Hamas reconciliation agreement” in his mind. And he wondered, what was the image that al-Masri would like to see on the Israeli side? Al-Masri provided an interesting answer. In essence he said – I have a dream. The dream is that Prime Minister Netanyahu will go to Ramallah, the way President Sadat went to Jerusalem, and say, I am ready to make peace with you, and for you to establish a Palestinian state alongside the State of Israel. He said that we Israelis should call on the Prime Minister to do this. 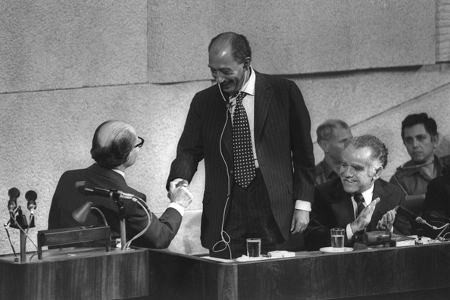 Sadat in Jerusalem – Netanyahu in Ramallah?

No doubt a wonderful dream, which he repeated on prime-time Israeli TV at 11 p.m. that night in a debate with former Netanyahu bureau chief Zvi Hauser on Channel 2.

However, on my way out, I said to Riman Barakat, the Palestinian co-director of IPCRI, it’s a wonderful dream, but it won’t be achieved with Netanyahu. It will probably require an alternative Israeli government, with someone else at the head.

So is President Abbas and the current Palestinian leadership “the Palestinian Peace Now”? Well, the official Palestinian position is clearly in favor of a two-state solution, a Palestinian state in the West Bank and Gaza, with East Jerusalem as its capital, with mutually agreed upon land swaps on a one-to-one basis. The PLO has also established a special Committee for Interaction with the Israeli Society to communicate its desire for peace, headed by Muhammed Madani. His deputy, Elias Zannari, participate in the Tel Aviv meeting. And Abbas is committed to non-violence, and to security cooperation with the Israelis.

For the sake of contrast, can anyone imagine the Likud, Prime Minister Netanyahu’s party, establishing a Committee for Interaction with the Palestinian Society? They don’t even recognize the idea of a Palestinian state, or the two-state solution in their party platform. Of course, the other question that went unasked is, where is the Israeli Peace Now, the organization which once mobilized 100,000 people into the streets when Prime Minister Begin and President Sadat went to Camp David, and 400,000 after Sabra and Shatila?

The polls continue to say that the majority of the Israeli people support a two-state solution, and only 20% of the Israelis have ever visited a settlement in the West Bank or East Jerusalem. However most Israelis don’t believe it’s possible to achieve peace in the foreseeable future. What we need is another dramatic event, a formative turning point, and I’m sure that then the Israelis will take to the streets to support peace once again.

This article originally was published at The Times of Israel: http://blogs.timesofisrael.com/the-palestinian-peace-now/