There is something profoundly moving about seeing “Selma”in Tel Aviv. Although the events described in the movie took place in Alabama in 1965, they clearly resonate with the Israeli experience of 2015. The catalyst for the events described in the film was the obstacles placed before black voters by right-wing white supremacists in America, while here in Israel, facing a critical election campaign, right-wing Jewish supremacists have tried to create obstacles before Arab voters by raising the threshold for parties getting into the Knesset from 2 percent to 3.25 percent of the vote.

Nonviolent action in Alabama and Israel

In “Selma”, we see how Dr. Martin Luther King Jr. and his colleagues, via nonviolent action, a March from Selma to Montgomery, combined with political action, overcame the challenge, leading to the passing of the historic Voting Rights Act.

Marching from Selma to Montgomery, Alabama (image from the film “Selma”)

Here in Israel, the four Arab parties, also met the challenge of the raised threshold by non-violent action, the merging of their parties to run together as the Arab Joint List, and the expectation is that there will be an increase in Arab voting by at least 10 percent.

We know that the high rate of black participation in the 2008 and 2012 elections was one of the keys to the two victories by Democratic President Barack Obama. And here in Israel, a higher percentage of Arab voters could be one of the key game changers that might produce a center-left victory, defeating the right-wingers like Foreign Minister Avigdor Lieberman, whose Yisrael Beiteinu Party (Israel is Our Home, which ironically is declining in the polls because of a series of scandals) insisted on raising the voter threshold in the 2013 coalition agreement, to try to drive the Arabs out of the Knesset. 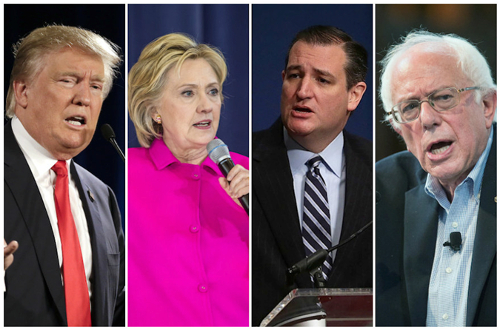 Controversies about Johnson and Jewish participation

I know that there that there have been a number of controversies about the script of “Selma”, as written by director Ava DuVernay and her associate Paul Webb. One focuses on her depiction of President Lyndon Johnson as one of the “bad guys”, who only grudgingly agrees to support civil rights and the Voting Rights Act. Clearly DuVernay has used artistic license in describing the dynamics between Dr. King and President Johnson. Even Andrew Young, one of the leaders of King’s Southern Christian Leadership Conference (later a Congressman, UN Ambassador and Mayor of Atlanta) has said that the depiction of the relationship between President Johnson and Dr. King “was the only thing I would question in the movie…”

Another controversy has raged among Jewish bloggers and the Jewish media, the fact that DuVernay chose to virtually ignore the Jewish contribution to the civil rights struggle. In the actual photos of the 1965 march we see Rabbi Abraham Joshua Heschel walking alongside Dr. King, and at the 1963 March in Washington we know that Rabbi Joachim Prinz was one of the prominent speakers, and we of course remember the sacrifice of the two young New York Jews, Andrew Goodman and Michael Schwerner, who were killed together James Chaney in Mississippi in 1964, and we also know that a significant percentage of the whites, perhaps even a majority, who participated in the Freedom Summer of 1964, were Jewish, motivated by the liberal and progressive values that they had been nurtured on. All we see in the movie is a brief shot of a man on the march wearing a kippah. 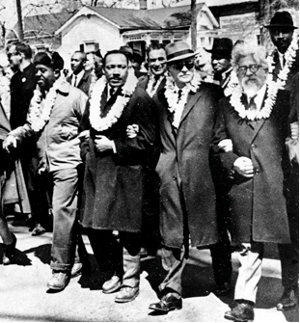 DuVernay’s response to these critiques has been that she does not see herself as “a custodian of anyone’s legacy”. In response to criticisms that she rewrote history to portray her own agenda, DuVernay said that the movie is “not a documentary. I’m not a historian. I’m a storyteller.”

I understand and in many ways agree with the critique. Yet DuVernay has a right to tell the story as she sees it – the black struggle for equality within American society. Someone else, probably a Jewish filmmaker, will tell the story of the black-Jewish partnership in the civil rights struggle.

What disturbs me is some of the talk-back comments that I read following the articles which criticized DuVernay for leaving out the Jewish element in the struggle. Some of them say that the Jews have no business helping others, and should focus all their energies only on Jewish solidarity. They clearly belong to the camp which says that Israel cannot be both a Jewish and a democratic state. They are related to the Jewish supremacists, otherwise known as racists, who reject the principles of Israel’s Declaration of Independence, which declared that “The State of Israel… will foster the development of the country for the benefit of all its inhabitants; it will be based on freedom, justice and peace as envisaged by the prophets of Israel; it will ensure complete equality of social and political rights to all its inhabitants irrespective of religion, race or sex; it will guarantee freedom of religion, conscience, language, education and culture; it will safeguard the Holy Places of all religions; and it will be faithful to the principles of the Charter of the United Nations.”

As someone who lived through the civil rights struggle, initially in the States, and later watching with admiration from afar, in the Middle East, I was extremely moved by actor David Oyelowo‘s low-keyed portrayal of King, and appreciated the renewed cinematic encounter with SNCC (Student Non-Violent Coordinating Committee) leaders John Lewis and James Foreman, with Ralph Abernathy, Malcolm X and Coretta King, all of whom were heroes of my youth. And I wonder how the current Millennials (Generation Y?), who didn’t live through that period, relate to the film. 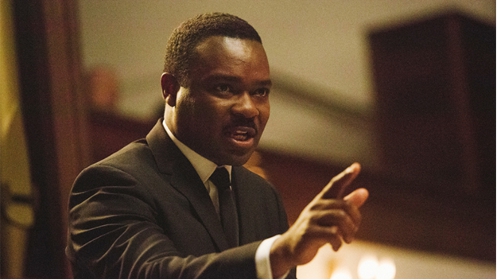 Whatever its weaknesses, this is a good and important film, a film that everyone should see.