Roundtable Discussions   |  Book Reviews   |  Culture, Literature and Arts  |  Economics   |  Policy Papers  |  Interviews  |
Who will hold “The Key to Peace”?
By Hadassah Haskale
By

I continue to read in the most recent issue of the PIJ “Jerusalem: The Key to Peace”. Laura Wharton's article “Jerusalem Under Nir Barkat: Three Dangerous Approaches to the City’s Future”, confirmed what I noticed some years ago when our present Mayor of Jerusalem was first campaigning for office. He spoke in my neighborhood of Kiryat HaYovel. Actually, the expression in his eyes of glaring hatred at me when I asked or mentioned something in regard to the Arab residents of the city, spoke louder than any words could. 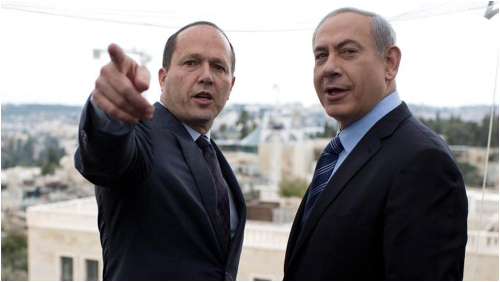 Jerusalem Mayor Nir Barkat with Prime Minister Netanyahu: Glaring hatred in his eyes when mentioning the Arab residents of the city.

If this man will continue to hold the key to power here, the depressing spiral of land-grab, despair and violence in the city will only become worse. Before his reign, the now besieged neighborhood of Sheikh Jarrah, where homes are being destroyed and local Arabs ousted to make way for Jewish settlers, was a pleasant, mostly Arab neighborhood with a Jewish minority that blended peacefully with the locals. I remember what it was like when I visited a friend in a hospital there in 2008. It's imperative that we locate a strong humane candidate for mayor to hold the key to peace, Jerusalem, The sooner her or his campaign for election begins, the better.