Hani al-Masri
Hani al-Masri is a Palestinian political analyst and an independent columnist for several Palestinian and Arab papers. He is the founder and director of Bada’el (the Palestinian Center for Media and Research), Nablus, and a member of the PIJ Editorial Board.
The bloody coup that was carried out by Hamas (June 2007), and the decrees issued by Palestinian President Mahmoud Abbas (Abu Mazen) as a response - dissolving the government, declaring a state of emergency and forming an emergency cabinet - are evidence of an unprecedented geographical and political division between the legitimate authority and rebel factions. If not tackled soon enough, this rift could spell the end of the peace process and negotiations and, with it, the likelihood of the Palestinians achieving their right to self-determination through the establishment of a Palestinian state on the territories occupied in 1967, with Jerusalem as its capital, as well as the solution to the refugee problem in accordance with United Nations General Assembly Resolution 194. Put more succinctly, this could mean the demise of the option of two states for two peoples.
The prospects get even gloomier if we add to the recent developments the following factors. First, despite their political divergence, the successive Israeli governments continue to create facts on the ground in the occupied territories through the expansion and intensification of settlements and the building of new ones; the construction and completion of the separation wall; the isolation of the [Jordan] Valley, which has led to the evacuation of the population from a land area that constitutes 30% of the occupied territories; the isolation and Judaization of East Jerusalem; and the separation of the West Bank from both Gaza and Jerusalem, and its fragmentation and cantonization. All this makes the creation of a Palestinian state a distant possibility that keeps receding with each new day.
Second, with the absence of a process of peace, it is difficult to contemplate the achievability of peace - especially during the next two years. This can be attributed to the total bias of the Bush administration towards Israel and its inability to extricate itself from the Iraq quagmire, which has cost it its credibility in the region, and lost it its ability to pursue an appropriate strategy in Iraq, Iran, Lebanon, Syria and Palestine. The most that one can expect at this stage is a partial initiative in order to buy time, to cut the losses and achieve some damage control.
Although it appears as if the two-state option is fading because of Israel's facts on the ground and the Bush administration's biases, those very same factors may give more legitimacy and urgency to the two-state solution. All hope is not lost yet; a last opportunity still exists. 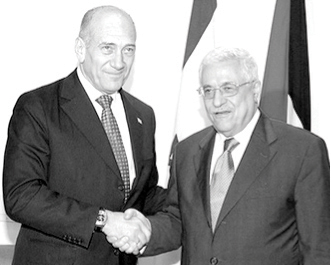 
This opportunity is predicated, ironically, on the failures of the successive Israeli governments to accomplish some of their major goals. Israel did not succeed - especially the extreme right-wing governments and elements in it - in the expulsion of the Palestinians from Palestine despite all the horrors of wars, massacres, military aggressions, sieges, closures and restrictions on the freedom of movement of people and goods. And in spite of the vastly deteriorated security and economic situation, there are still more than 5 million Palestinians living in the historic land of Palestine and there are no serious prospects of their being deported. In light of the high rate of population growth, Palestinian presence will remain stable - if not increase - despite the growing probability of voluntary emigration.
Therefore, Israel must seek a solution to counter those millions who constitute a demographic threat that increases with every birth of a Palestinian child. Israel has tried to deal with the problem through the imposition of unilateral solutions, like the disengagement from Gaza, but did not succeed. It also experimented with other approaches by trying to impose an Israeli solution to the conflict, as in Camp David (2000), but failed even then. Since September 28, 2000, Israel has been engaged in an ongoing military aggression against the occupied territories in an attempt to break the will of the Palestinian people and to push them to accept a settlement on Israel's terms, in order to liquidate the Palestinian cause. What Israel reaped from all this was a moderate Palestinian leadership headed by Abu Mazen, who, like Yasser Arafat, found that Israel's terms for peace fell far short of the Palestinians' minimum demands. And it reaped the mounting popularity of Hamas and decline in Fateh's popularity and influence.
Israel's persistence in pursuing its policies, which do not acknowledge the minimum rights of the Palestinians, could eventually result in the defeat of Fateh and Hamas, but will never be able to impose a unilateral solution on the Palestinian people. Alternatively, this will lead to the emergence of Palestinian, Arab and Islamic hardliners following even harsher trends than the existing one. Additionally, all the facts that have been created by the Israeli occupation - and those that might be still be created in the future - such as the settlements, the separation wall, the isolation of the Jordan Valley, the Judaization of Jerusalem, etc., will never give Israel the right to hold the Palestinians bound by any agreement because those facts lack legitimacy and recognition by the Palestinian people and leadership, as well as by the Arab and international communities. These facts go in contravention against international law as was seen in the rulings of the International Court of Justice (The Hague) pertaining to the construction of the wall. The Court's provisions focused not only on the illegality of the wall but also stressed the need to end the occupation and everything built by the occupation since June 4, 1967 to date.
In addition to the above-mentioned situation, a change has occurred both on the regional and international levels after the inability of the American administration to achieve success in its war against terrorism, and the failure of its strategy of "preemptive" wars, direct intervention, by passing the UN and its flouting of international law. The Bush administration has so far failed in Iraq and in Afghanistan, and it did not solve the problems in Iran, Lebanon, Palestine and the whole region. All this has cost the American administration its credibility and reduced its capacity for deterrence.
The predicament of Israel is that it has been transformed into a tool and an advance base for the American strategy in the region, while, in fact, Israel is unable to impose itself even in areas adjacent to it and within its sphere. What happened in the Second Lebanon War has dealt a blow to the theory of Israeli deterrence; this in itself could have major repercussions on the role of Israel in the region.
A change has occurred in the region - and even worldwide - which seemingly will continue and deepen. And this change had led senior strategists like Zbigniew Brzezinski to declare the end of the era of American domination in the Middle East. He went even further to compare the predicament of the U.S. in Iraq to that of Britain, France and Israel in the Suez War of 1956 that ended the British-French influence in the region. Brzezinski may have been exaggerating, but he was not blind to the fact that the region is in flux and, consequently, a resolution to the Israeli-Palestinian conflict is crucial and we must be ready for the establishment of an independent Palestinian state. It is worth mentioning that the most important suggestion brought forward by the Baker-Hamilton Commission was that solving the Palestinian issue is the key to solving the problems and the crises in the whole region.
The lack of other alternatives makes the option of two states more vital and compelling than all other options. For example, a state with provisional borders will solve nothing; it will only be a recipe for the continuation of the conflict. The Jordanian option is a formula for transferring the conflict to other areas because it does not include a readiness on the part of Israel to withdraw from the territories it occupied in 1967 in order to give these territories to Jordan. But Israel is willing to have Jordan play a role in providing security in the separate cantons, which will be created de facto in the occupied territories, in cooperation with Israel and a weak Palestinian Authority or another substitute authority.
The alternative to an independent Palestinian state where Palestinians can live in dignity and where their rights and freedoms are safeguarded is going to be chaos, wars, uprisings and continued resistance. This means destruction and bloodshed for which all the peoples in the region - not only the Palestinians - will pay the price.