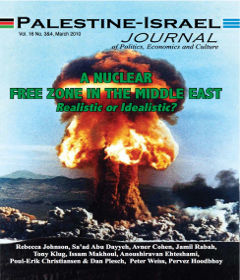 Issam Makhoul
Issam Makhoul is chairperson of the Emil Touma Institute for Palestinian and Israeli Studies in Haifa. He was a member of the Knesset in 1999-2006 for the Democratic Front for Peace and Equality (Hadash) and the only MK to have raised the nuclear question for debate before the Knesset plenum. Makhoul is a member of the International Planning Committee for the May 2010 NPT Review Conference.

In the joint manifesto issued by Albert Einstein and the philosopher Bertrand Russell on July 9, 1955, they wrote:

…[W]e are speaking on this occasion, not as members of this or that nation, continent, or creed, but as human beings, members of the species Man, whose continued existence is in doubt… The problem… stark and dreadful and inescapable [is]: Shall we put an end to the human race, or shall mankind renounce war? …We appeal as human beings to human beings: Remember your humanity and forget the rest. If you can do so, the way lies open to a new Paradise. If you cannot, there lies before you the risk of universal death.

Today, humanity has reached a turning point. The old nuclear order, which was created with the dropping of the U.S. nuclear bombs on the cities of Hiroshima and Nagasaki 65 years ago, has come to a dead end. We have witnessed the failure of the Bush-era doctrine of "preventive wars," extreme neo-liberalism and the brutal strategy of imposing the will of the United States by force. This, combined with the processes of globalization and other geopolitical changes at the turn of the century, is forcing humanity to choose between two options: Either more and more countries, who are willing to do so and have the capability, will join the nuclear club; or humanity will choose to live in a world free of nuclear weapons.

The Old Nuclear Order Can No Longer Be Sustained

The nuclear order, born from the ruins of Hiroshima and Nagasaki at the end of World War II and continuing through the Cold War era, cannot be sustained any longer. At the beginning of the 21st century, humanity will either face a dangerous new nuclear order in which weapons of mass destruction will spread widely, or humanity will arrive at a new anti-nuclear order, where no one will possess such weapons, with no exceptions.

What motivates public debate on the nuclear question today is not really the dangers facing countries that possess nuclear weapons, but rather the obsessive desire of these countries to preserve the old nuclear order which grants them, arbitrarily, a monopoly on nuclear weapons, globally as well as regionally. This is especially the case with countries such as Israel that are not signatories to the Nuclear Non-Proliferation Treaty (NPT) but threaten disastrous war on those nations that aspire toward nuclear capability. Those who oppose the Iranian nuclear project and wish to stop it cannot turn a blind eye to the extensive Israeli nuclear arsenal without being accused, and rightfully so, of hypocrisy.

Hiroshima and Iran, Not Existential Threats

The criminal bombings of Hiroshima and Nagasaki were not defensive acts carried out by the U.S. because it faced a threat to its existence. It was not done in order to determine the present, but to determine the future. It was not done to overcome Japan (as the outcome of the war had already been determined at that point), but to overcome the Soviet Union and to shape the post-war world. In the same manner, the campaign of fear and terror launched by the Israeli government with regard to the Iranian nuclear program is not meant to end any real existential threat to Israel, but to prepare public opinion for a war of aggression, aimed at maintaining the Israeli nuclear monopoly in the Middle East.

What is clear now, and becomes clearer every day, is that more and more forces in the world are challenging the "right" of a handful of states to hold a nuclear monopoly and are refusing to subject themselves to this reality. The centers of nuclear tensions throughout the world revolve around nuclear countries that insist on maintaining their monopoly, on the one hand, and countries that are challenging this monopoly, on the other. This insistence on nuclear monopoly, in the Middle East in particular, jeopardizes the cause of world peace and the well-being of the peoples in the region.

particular, the initiative of U.S. President Barack Obama for a nuclear-free world, which led to the agreements in Moscow for a mutual reduction in nuclear arsenals, have all created favorable conditions for pushing forward a joint struggle for a just peace in a nuclear-free Middle East. This opportunity is fueled by the realization that the security of the peoples in this region will be attained not by a nuclear arms race, but by nuclear demilitarization.

Yet very worrying indeed was an item in the Washington Post (May 21, 2009) in which Obama reportedly told Israeli Prime Minister Benjamin Netanyahu during their meeting in May 2009 that he agreed to extend the American "agreement of ambiguity" with Israel, which allows it to maintain a nuclear arsenal without being subjected to the control and supervision of international bodies. As a result of this decision, the U.S. will not pressure Israel to expose details of its nuclear capability and will not demand that Israel sign the NPT.

Up to now, Israel has addressed the issue of nuclear weapons by adhering to two basic principles guiding its policy: the principle of ambiguity and the principle of deterrence. Both of these Israeli concepts have been eroded as the result of developments on the ground.

On the one hand, the whole story of ambiguity and deterrence is a blatant lie that was concocted by Israel in order to serve the American interest in turning a blind eye to the nuclear reality in Israel. It is now clearer than ever, even to Israelis, that there is no option for a one-sided monopoly in the Middle East over nuclear weapons. If such weapons exist in the Middle East, they will not be in the exclusive possession of any one party. Thus, the existence of a great stockpile of nuclear weapons in Israel not only does not deter other states from developing these weapons, but it actually motivates them to attempt to obtain them and other non-conventional weapons in response.

On the other hand, the policy of ambiguity has been exposed as a joke as far as the outside world is concerned, since the whole world knows that Israel is a huge warehouse of atomic, biological and chemical weapons that serves as the basis for the nuclear arms race in the Middle East. The "Iranian danger" that Israel likes to invoke is the outcome of, not the cause for, the nuclear policy in the Middle East, led by Israel - the reaction to Israel's Dimona atomic reactor, not the explanation for it.

There is no doubt that in the struggle between the nuclear order and the anti-nuclear order, globally and regionally, the moral power of all peoples and peace movements in the world, particularly in the Middle East, is a vital factor in the rejection of the widespread notion of double standards regarding the sources of nuclear danger. Those behind this notion insist on dealing with the nuclear question in the world especially in East Asia and the Middle East, in an immoral fashion, casting doubt on the credibility of those who promote nuclear disarmament. Trust is needed to promote initiatives for a nuclear-free world, and it is a necessary condition for their success.

For a Middle East Weapons of Mass Destruction-Free Zone

The real challenge for all concerned parties in the Middle East and in the world, including for the Obama initiative for a nuclear-free world, is to rise to the occasion and use the debate on the Iranian nuclear project to open up the nuclear question in the Middle East as a whole. The initiative should be taken to dismantle all weapons of mass destruction (WMDs) in the region, put pressure on Israel to join the NPT and take confidence-building steps to stop the armament race, establish a nuclear-free zone in the Middle East, and abolish all plans to develop WMDs, whether in Israel, Iran or elsewhere in the region.

The main task concerning the issue of a nuclear Iran should be to turn things around. Instead of addressing the question of how to destroy the Iranian nuclear project by military means, the real interest of all peoples in the Middle East, including the Israeli and Iranian peoples, is to safeguard their security not through nuclear arsenals but through denuclearization of all states in the area. The opposition to the nuclear threat cannot be a selective issue and should not be handled with double standards.

Dismantling all WMDs and freeing the nations of the Middle East from the dangers of atomic, biological and chemical death must be a fundamental aspect of any peaceful solution, and a cornerstone of the Arab Peace Initiative and Obama's initiative for a nuclear-free world.

A version of this article was posted on the Hiroshima Peace Media Center website, at www.hiroshimapeacemedia, and also appeared in Japanese in the Chugoku Shimbun newspaper.