Bernard Sabella
Dr. Bernard Sabella is a member of the Palestinian Legislative Council (PLC).
For some time now I have been pondering the following question. As the Palestinian-Israeli conflict has reached a new phase characterized chiefly by the Israeli disengagement from the Gaza Strip, on the one hand, and by the construction of the separation wall in the West Bank, on the other, the rationale behind reconciliation work - as principally attempted by encounter groups- calls for some serious examination and reassessment.

Encounter Groups and What Motivates Them

Some encounter groups are motivated by the wishful thinking that changing hearts - primarily Palestinian hearts - would lead to peace and eventual reconciliation between Israelis and Palestinians. Accordingly, this changing of Arab Palestinian hearts would, in the long run, enhance the security of the State of Israel. The assumption here is that Israeli Jewish hearts have already been changed and won. Thus, winning Arab Palestinian hearts is an important premise for holding encounters, exchanges, dialogues, and all other types of activities that would encourage or directly lead to reconciliation.
Some other encounter groups are motivated by a genuinely shared utilitarian concern such as the environment or school children living in a situation of conflict. While these groups are directing their attention to practical subjects and issues, the fact of the coming separation will seriously hamper their work, especially when regular and ongoing face-to-face encounters are needed.
Another type of encounter groups is that of the "peace, dialogue and coming-together industry." These are often supported by rich and powerful donors, often states or a group of states, such as the European Union. While these groups have mushroomed after the Oslo Accords (1993), they rely for their "success" mostly on meetings outside the country and on the generosity of the Israeli authorities in granting permits to Palestinians to enable them to participate in meetings and encounters inside Israel. With separation, the raison d'être of such groups becomes less convincing, especially that by 2008 Israel is planning to bar any Palestinian from entering its territory freely.
Certain encounter groups are basically interest-driven. Here one finds the economists, the go-betweens in a variety of areas, and some professional groups. While separation would not altogether stop the work of these groups, it would drastically impact the practical aspect of their relationship, as their mutual interests would become increasingly governed by the reality of separation. Hence this reality would push these interest-driven groups to formalize their relationships in order to minimize the impact of separation on their mutual interests. These groups can be characterized as elitists and profit-driven.
Finally, there are the international encounter groups that are committed to an agenda of ending the occupation and assisting Palestinians and Israelis to reconcile would themselves need to reexamine their role, given the reality of separation. No longer would groups originating in Europe or North America or elsewhere offer their services for the cause of reconciliation in Israel and Palestine, treating the two as one geographic entity. This would have implications for their work and methods of intervention. 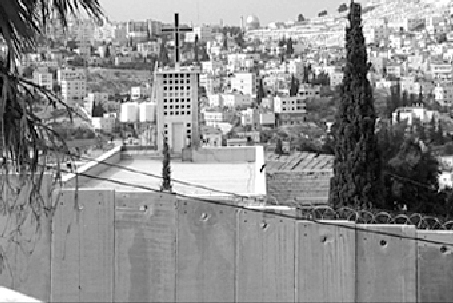 Reconciliation Cannot Be Compatible With Separation.

It is worth noting that the separation as envisaged will not be a complete one since large chunks of the northern West Bank, East Jerusalem and Hebron areas would be annexed to Israel through the illegal settlements that have been implanted there. This would pose a tough challenge to all those who work for a lasting and just peace. Specifically, these settlements would interfere with the physical and geographical contiguity of the much-anticipated Palestinian state, to the extent of threatening its viability. In other words, separation and the unilateral acts by the government of Israel would "cantonize" the Palestinian territories and would render a two-state solution untenable.
The separation wall and the unilateral acts of the Israeli government such as the disengagement from the Gaza Strip are causing, and will continue to cause, serious infractions on the human-rights level. Encounter groups, if they are serious about their work, should redirect their energies and goodwill towards exposing these infractions rather than dwelling - as some of them insist on doing - on the importance of changing attitudes. Attitudes will change only when Israeli practices on the ground respect international law and guarantee the basic rights of the Palestinian people.

A Response to Separation

It is almost a truism to say that reconciliation cannot be compatible with separation since reconciliation requires face-to-face encounters. Has there ever been a recorded case when reconciliation was attempted and achieved from behind separation walls and across checkpoints? This is hardly a cynical stance, but I am suggesting that the Israeli peace groups should focus the bigger part of their work on the Israeli scene. The same goes for international groups whose job would be to expose the negative impacts of Israel's separation policy, especially in the area of human rights.
For Palestinians, the immediate and most important agenda is the building and welfare of their own society. Reconstruction is needed not simply in terms of the institutionalization of good governance, but also in all areas of life. These challenges should be the national priority. The disadvantages and injustices caused by the Israeli separation and ongoing occupation practices will continue to plague the Palestinians as they try to rebuild their society. The backing and solidarity of Israeli, international, and all peace-loving groups remain important in supporting Palestinians towards building their free democratic state. <