Khaled Furani
Khaled Furani is a Visiting Scholar at the Department of Anthropology, Columbia University, New York.
In completing his Rituals of Truce, the Israeli-born poet Ben Hollander, who moved to New York at the age of six, offers both a compelling and a perplexing work. Its seemingly disjointed citations remind one of a parallel work (counterpart would not be quite the right word) on the Palestinian side: Elia Sulaiman's Divine Intervention. Both works appear driven by a tragic-comic, post-structuralist tenor, which governs the very form of their presentations. Both works refuse to follow linear or realist pronouncements in their respective diagnosis of a treacherous nationalist existence.
The viewer/reader of both works is challenged to connect what seems initially disconnected or randomly articulated. This apparent randomness, verbalized perhaps in Hollander's reference to James Baldwin about "daring to say everything," leads one to wonder if his work entails a visceral response to a colonial condition closing in on the colonizer as well as the colonized. But the jumpy nature of Hollander's text does not make it any less worthy of following. In my comments below, I am less interested in the content of political stances that Hollander articulates. I am more interested in how he articulates them and what implications they have on one of his main goals for this work: establishing conditions of truce between Israelis and Palestinians. 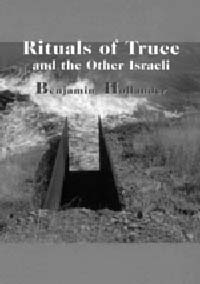 In unexpected ways, the concerns of Hollander's work conjure another poetic composition, this time from the classical Arabic poetic tradition: Lamiyat al-'Arab by al-Shanfarah. In this pre-Islamic ode, which the Prophet Muhammad reportedly recommended teaching to children, the brigand poet documents solitary life outside the tribe. Like al-Shanfarah, Hollander is searching for trust. While al-Shanfarah invested his trust in wolves of the wilderness more than his own tribe, Hollander chose to trust his Palestinian interlocutor more than his own position about a collective version of Jewish identity, history and mythology. It is not irrelevant therefore that Hollander's work is published by Parrhesia, a Greek phrase connoting truthful and fearless speech. In that sense, Rituals belongs to a tradition of committed, irreverent Jewish works contesting foundational premises and promises of the Zionist project that is Israel.
Although Hollander's oscillates between different audiences of his text, it is safe to assume that he strives for conditions of trust among Jews and between Jews and Arabs and perhaps even among different affiliations within his self. Endorsing Baldwin's position about the futility of arguing with someone's experience, belief or position, Hollander conducts in the first part of the book four "rituals," which are expected to beget conditions of trust. Arguing derived from the Latin arguer used to mean demonstration as well as contestation. Today, it is the latter sense that is more commonly known. It is arguing in the sense of quarrelling and contesting that Hollander is implicitly evoking and explicitly avoiding for the sake of truce. Instead of contesting, he conducts confessions in a series of four rituals. His confessions aim to reveal the limits of both his rhetorical and moral authority. Through the very act of delineating those limits, Hollander hopes to obtain the trust of other Israelis and Jews as well as Palestinians, such as Raja Shehadeh whose writing has significant influence on Hollander's. To the first two groups the author discloses his abrogated nativity as an Israeli who has no interest in returning to the homeland he left (but never completely so). To Palestinians he confesses Jewish wrongdoing that led to their misery.
It is of course possible that in mutual confessions lie the Third Way, which Shehadeh and Hollander identify as a potential release from the prison of animosity between those endowed with and those deprived of national sovereignty. Yet it is also possible that what has been lacking all along in the colonial encounter between both peoples, now more than a century old, is precisely that: an argument in the sense of a contestation driven by just, enlightened, even if conflicting positions. As such, what has supplanted the absence of an argument is a military and financial might necessary for the creation and fabrication of facts on the ground. And it remains within reason to expect that the side that has a state is more efficient at this task than the side that does not.
Throughout his rituals and the whole book, Hollander employs a method of interception: history intercepts the present, pain pleasure, facts fiction, seriousness humor, pictures words, and writing meta-writing. These interceptions come from a diverse array of media: novels, e-mail correspondence, poems, film script, dialogues and monologues. This inchoate diversity of sources belies any rituality that Hollander's presentation may strive for. Save his attention to the rules of English grammar, it is hard to discern what is ritualistic about his rituals. However, if one takes rituals as that which steps into the beyond, into the extra-ordinary, then perhaps the title and the content of Hollander's text would seem more compatible.
This invocation of rituals appears especially applicable to the second part of the book where Hollander strives to tell a story outside the order of the day, outside history as we know it. He is obviously troubled by the ramification of the Jewish State on Jews and by the proposition of two states for two peoples. Neither state, Hollander seems to believe, is capable of ridding the two peoples from their existence as questions: the "Jewish Question" and the "Palestinian Question." What Hollander strives for is a state of being for both peoples where they can talk to each other from histories that do not pit them against each other by commonly recognizing the limits of their respective historical claims.
I am not exactly sure what premises about history Hollander is working with, yet I wonder in what ways are they predicated by the foundational modern condition that Nietzsche diagnosed as the death of God? Would what we know today as history figure as it did in Hollander's work were it not for this death? In other words, it remains to be seen, if it is the shedding of "history" and certain "historical" claim as opposed to other forces that would prove to be the necessary requisite for the arrival of a new Israeli or a truce between Israelis and Palestinians.
Whatever one takes the subject of that monumental modern death to be - god, God, history, language, nature, ideology - it is clear that Hollander is proposing that Israelis/Jews face the limits of their moral authority and historical positions. And it is as though in reaching these limits would they be able to reach the Other who is necessary for a truce, whether that other is located inside the self or outside it. Taken to its logical limits, his strategy of lowering defenses by mistrusting one's historical claims opens the possibility that in Hollander's there lies the work of more than the Other Israeli that is in him but also the Other Palestinian that a Jew could be. Such blasphemous redrawing of nationalist boundaries and the resultant admissibility of one's Palestinianess rests, of course, on a perilous and daring excavation into what Palestine or Israel was, is, and could be about. Towards such a daring excavation of the place and the self, Hollander's is a welcome initiation.