Vol. 12 No. 4   2005
This striking photo was part of an exhibition at the Yakar Center for Social Concern in Jerusalem. Smith says that the photo was taken in the village of Mascha. A Palestinian family consisting of a father, mother and three children live in the village which is adjacent to the Elkanah settlement. They didn't bother or threaten anyone. The settlers demanded that an 8.5 meter wall be established to protect the settlement, and the Israeli government gave in to their demands. 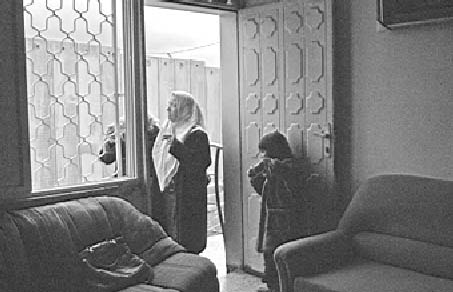 This is the sight that greets the family when they get up every morning.
Missing from the photo is the locked, iron gate. Whenever a family member wants to go out for business, household or school purposes, they have to call the IDF authorities to arrange for the gate to be opened. "If it wasn't so tragic, it would be absurd," says Smith. "Everything is being done to placate the settlers."
Elisheva Smith has documented many images of the Occupation over the years.
A selection of her photos can be viewed at: www.pbase.com/galleries