Vol. 13 No. 2   2006
"Endless Checkpoints" is the name of an exhibition of photographs taken by women of MachsomWatch. The group presented the exhibition at the Geographic Photography College in Tel Aviv during February-March 2006.

MachsomWatch is an organization of Israeli women, established in February 2001, with some 400 members of different backgrounds and personal and social characteristics - all volunteers. They share the position written on their tag: "No to Checkpoints, against the Occupation and for Human Rights". 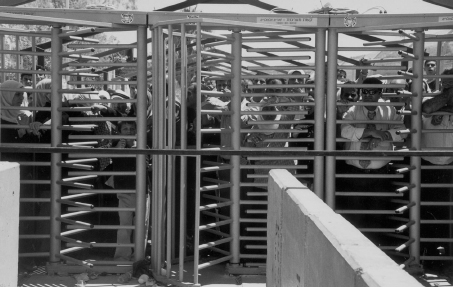 The women of MachsomWatch go out in small groups, twice a day, seven days a week, at the peak hours of movement for the Palestinian population. They observe at scores of checkpoints and "floating" barriers, which the Israel Defense Forces say have been set up as counter-terror measures in the West Bank, from Jenin in the north to the southern Hebron Hills. They also watch at the District Coordination Offices (DCOs) as well as at court proceedings and villages and they inquire and question the harsh administration which has developed during 39 years of occupation.

After each watch, the women write reports (in Hebrew and English), which are published in the organization's web page (www.machsomwatch.org) and constitute the basis for several publications. However, many of the women of MachsomWatch also document what they see with photos and video films. 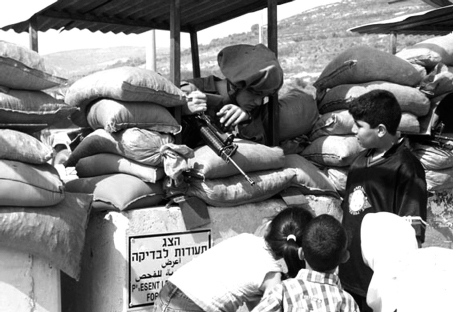 An Israeli soldier and Palestinian children at a checkpoint

The photos on these pages, shown at the "Endless Checkpoints" exhibit, represent only a tiny portion of the hundreds, perhaps thousands, of photographs taken by women of the group. These pictures document the harsh life to which the Palestinian population is subjected at barricades, security checkpoints, the security wall and the long lines at the DCO offices. The exhibit will also be shown in Beersheva (after originally being turned down by the municipality), Jerusalem and Haifa. The European Commission has expressed interest in displaying the photographs in Strasbourg and Brussels.