Ata Qaymari
Ata Qeimari is the director of al-Masdar, a daily Hebrew press translation service.
Several months have now elapsed since the formation of the government by Hamas following its sweeping victory in the legislative elections - generally acknowledged as extremely transparent and fair. Yet, this new government has been in crisis even before it was formed, mainly due to external pressure, although at the end of the day, the principal reason for the crisis lies in the movement itself. Hamas has failed to consolidate its legitimacy and to prove its suitability and efficacy in accomplishing the goals which it had set for itself and which drove it to participate in the elections.

This victory, which came against all expectations, surprised even Hamas itself. And even more importantly, it gave the Palestinian people a great deal of hope in reform and change. In point of fact, "reform and change" was the slogan used by Hamas in its campaign, and the Palestinians believed they were embarking on a new era. Now that an effective and armed force had become part and parcel of Palestinian legitimacy, prospects were looking up for ending the impasse and bringing the Palestinian problem to a successful conclusion.
This sense of hope pervaded all the political forces, including Fateh - Hamas's main rival and the major loser in the elections. In spite of certain signs of ill will on the part of Fateh and its reticence to cooperate with Hamas, in the end, it showed a high sense of responsibility by recognizing the results of the elections and ensuring a smooth and peaceful transfer of power. Indeed, President Mahmoud Abbas was at the forefront of those who called for giving Hamas a chance.
Hope in Hamas was based on the solidity of its political and social performances. During its short history, the movement has shown political flexibility and adaptability, tactical creativity, and, especially, a great capacity for steadfastness under all conditions - even after the assassination by Israel of most of its front-line leadership. In addition to its political acumen and staying power as a young rising movement, it was characterized by a high degree of honesty, transparency, and capacity which made it, in many respects, well-deserving of the confidence of the Palestinian people.
Unlike Fateh, Hamas presented a suitable list of representatives and candidates. They were very competent (60 Ph.D.s), with clean records and respectable personal backgrounds. Hamas succeeded in putting its finger on Fateh's weakest point: the strong desire on the part of the population to put an end to the corruption with which the Palestinian Authority (PA) and the ruling party - Fateh - came to be associated. Change and reform became imperative, not only for the sake of a socioeconomic recovery, but for political reasons as well. The PA's and Fateh's tactics to maneuver between negotiations and the fight against a generalized chaos during the Intifada have failed miserably to achieve the aspirations of the Palestinian people, even to a minimal degree. Thus, Hamas came to power riding on a high crest of hope.

Now, after more than half a year of the formation of the government, we're facing the reality of severe deterioration on the political, security, social, and economic levels. The country is fragmented in every respect: geographically, socially, politically, and security-wise. Gaza and the West Bank are totally dissimilar. On one side there is Hamas; on the other there is Fateh. We are once again reliving the calamity of the Palestine Liberation Organization (PLO) and the crisis between the interior and the Diaspora. Each of the movements is relying on power centers to bolster its position. For one, it is the presidency and the PLO; for the other it is the Palestinian Legislative Council (PLC). One party has at its disposal a few old security apparatuses, and the other new and renovated ones; armed militias with sovereignty and independent decision-making in war without peace. There is a complete disconnection with the past and its lessons and, thus, a repetition of experiences that have failed miserably, and the persistence in the policy of resistance that has proved its impotence. Israeli violations, killings, and destruction continue on a daily basis, while the Palestinian case is becoming marginalized, and the world turns a blind eye and goes on accusing us of terrorism for having elected Hamas. 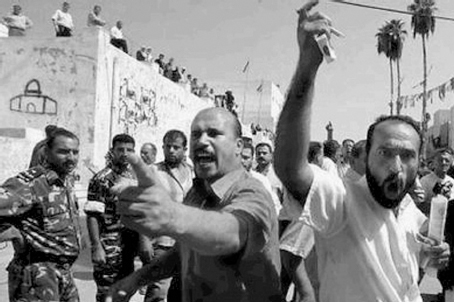 Poverty and unemployment are rampant. Services are out of order, and development programs and measures of any kind are nonexistent, even in Gaza a year on after the Israeli disengagement. The public sector employees, whose numbers have now reached over 165,000 (after Hamas's new appointments), have not been receiving their salaries. The government is handing out meager advances that do not even cover the minimum living requirements of these employees. The economy, which relies primarily on external assistance, is locked in a cycle of collapse. The employee who does not receive a salary cannot buy or spend; thus the economy stagnates, leading to widespread unemployment, poverty and destitution, complaints, as well as corruption and crime. Even worse, there is the violence that is often carried out in the name of resistance, progress, and other high-sounding values, and which increasingly takes the form of intense and narrow factional rivalries.
The greater the hope, the greater the disappointment. Hamas has failed to realize itself. If the essence of the movement consisted of liberation - political and national; reform - social and economic; and change - political and administrative, then viewed against the backdrop of the dire conditions in which the Palestinians are living, Hamas has failed to accomplish any of its goals.

It is of course possible to come up with justifications for Hamas, or to mitigate the blame by pointing to extenuating circumstances, such as external pressures, the occupation and its machinations, and other extraneous reasons that do exist in actual fact. It has to be said that the world has not given Hamas a single day of grace. Before it even embarked on forming the government, the international community came down on it with its harsh conditions, without giving it an iota of legitimacy or the chance to prove itself.
A similar situation is found on the internal scene. Hamas was expected to pay the salaries of the employees when it had still not formed a government. And as if by miracle, the almost defunct PLO was resuscitated and its recognition by Hamas became a sine qua non condition for the movement to be accepted nationally by other factions, and this included the Palestinian Front for the Liberation of Palestine (PFLP), the natural ally of Hamas.
The Hamas government was born in pain, and the same goes for the PLC, where Hamas holds a majority. It suffered long weeks of political bickering bordering on the surrealistic. Can it conceivably be legal for Fateh to do what it did before the swearing in of the new parliament, when it rushed through amendments to the law to boost the status and authority of the president? And is it legal for Hamas to cancel immediately after the ceremony all the decisions taken by the previous members of the PLC, with a Fateh majority?
All this is true. But where are the political flexibility and creativity with which Hamas was associated? Where are the responsibility and ambition, the steadfastness, and the staying power? And where are the achievements and the self-elevation and the elevation of the Palestinian people to greater heights of progress and advancement? These are legitimate questions that should be addressed to a movement that for a long period had claimed a right to lead and to represent the people. It has struggled for the sake of freedom and liberation and has raised the banner of change and reform. To invoke external pressures as an excuse is not justification enough for failure. One cannot help but compare Hamas and Hizbullah. Hizbullah was also hounded by the whole world, but what a difference in results. Was it only the amassed weapons that led Hizbullah to victory, or at the very least to avert defeat? Hizbullah held funerals for their martyrs, but not a single shot was fired, nor was there a single piece of weapon to be seen. With its wise stances, Hizbullah managed to keep its enemies at bay and to increase its allies. In contrast, we are shown sad and shameful scenes of martyrs being snatched from morgues and paraded across TV screens. In funerals and other occasions, we see scores of hooded persons shooting in the air, sometimes hitting innocent civilians.

The Issue of Recognition

The crux of the failure of Hamas lies in the issue of its recognition of Israel. At first glance, the position of the movement seems justified. How can it recognize Israel when Israel does not recognize not only the movement but the Palestinian people as a whole and their legitimate rights? Hamas also has asked, and rightly so: Where is the Israel that it is supposed to recognize? Is it the Israel that controls all of Palestine from the sea to the river and, by this, negate its self-existence and its legitimacy? Where are the borders of Israel that Hamas is asked to recognize? But a deeper look leads to another set of questions. Who in reality is in need of recognition? Is it Israel, which enjoys international recognition and backing, or is it Hamas, which is considered a terrorist organization by many countries? Hamas had already prepared itself for political bargaining with its acceptance of tahdi'a (calm) and by running in elections for an authority that came into being on the basis of international legitimacy. It gave more than one indication that it was ready to accept, under certain special conditions, a state within the 1967 borders. The impression is, then, that the quibbling over the issue of recognition is aimed, in practice, at enhancing the conditions of political negotiations. But Hamas acted as though its ultimate objective were the elimination of Israel and wiping it off the face of the map, which resulted in increased pressure against it. This led to the paralysis of Hamas, which failed to achieve any of its aims and is not considered a partner in any negotiations in the international arena. Moreover, the refusal by Hamas to recognize Israel gave full legitimacy to the siege on it and, with it, the Palestinian people.
Irrespective of the modalities of dealing with the international and local conditions imposed on it, Hamas has become a party that leads a government that can neither rule nor resist. It cannot give in to recognition and sully itself with politics, nor remove itself from power to preserve the purity of resistance. It is caught in a deadlock for which it is not to be envied.
Naturally, this is not a call for Hamas to recognize Israel. It is best for it to abide by its positions, such as they are. But it cannot wear two hats at once. In short, what has emerged about Hamas is the complete absence of political flexibility, acumen, and creativity, which are vital elements for any political success.

As was mentioned above, the degree of disappointment is commensurate with the amount of hope. But wasn't hope exaggerated in the first place? Or were not the signs of failure already written on the wall? In retrospect, the signs were indeed there, but perhaps they were ignored or forgiven because of the fervent need for salvation on the part of the Palestinian people. <