Ruth Lapidoth
Dr. Ruth Lapidoth is Greenblatt Professor Emeritus at the Hebrew University of Jerusalem, Professor of International Law at the College of Management and author and editor of a number of books on Jerusalem. She was awarded the Israel Prize for Legal Research in 2006.
The Israeli claim to Jerusalem is based on the fact that in 1948 Britain left the area and a vacuum of sovereignty ensued. Only a state acting lawfully had the right to fill this vacuum. In 1948 Israel acquired control over the western parts of the city in an act of self-defense and hence was authorized to fill that gap, whereas Jordan acquired control over the eastern neighborhoods in an act of aggression and therefore had no right to annex them. In 1967 Israel took the eastern parts in an act of self-defense and thus had a right to acquire sovereignty in that part as well.1
According to other theories, sovereignty over Jerusalem is suspended until a final settlement is reached2; or Jerusalem is still subject to the corpus separatum notion recommended by the UN General Assembly in 19473; or the Palestinian Arab people have full legal sovereignty over all of Palestine, including Jerusalem4. In rejecting the Israeli claim, the Palestinians also rely on Security Council Resolution 242 (1967)5.
The international community has not recognized Israeli de jure sovereignty in Jerusalem, although in practice Israel's control over the Western neighborhoods has usually been accepted, in particular the applicability of Israeli law and jurisdiction6. Most states, as well as the UN organs, however, consider the eastern parts as occupied territory7.
There are at least four main components to the Jerusalem problem:
1. National aspirations: Israelis and Palestinians have conflicting claims to sovereignty. Israel claims sovereignty over the whole city, and the Palestinians have a similar claim, at least over the eastern neighborhoods of the city.
2. The religious aspect: Some of the most sacred places according to Judaism, Christianity and Islam are located in the city. These places are holy to many millions of people who do not live in the city nor in the area.
3. Municipal management: The population of Jerusalem is very heterogeneous, and hence special solutions are needed for the municipal management.
4. The periphery: Whatever solution is reached with regard to borders, Jerusalem will be between Israel and the Palestinian state. The relationship between the city and its periphery requires special arrangements.

In the Declaration of Principles on Interim Self-Government Arrangements of 1993, Israel and the Palestinians dealt, although to a very limited extent, with Jerusalem. Jerusalem was not to be included in the interim arrangements - a concession by the Palestinians - and, on the other hand, Israel conceded that the city would be one of the subjects to be dealt with in the framework of the negotiations on the "permanent status." In addition, it was agreed that "Palestinians of Jerusalem, who live there, will have the right to participate in the election process" for the West Bank and Gaza Strip (Annex 1, para. 1). These elections took place on January 20, 1996, and the Jerusalemites did participate.
In October 1993, Israel's Foreign Minister Shimon Peres sent a letter to the Foreign Minister of Norway, recognizing the essential tasks performed by Palestinian institutions in East Jerusalem, including economic, social, educational and cultural, and the holy Christian and Moslem places.
Whenever the permanent status negotiations resume, they will have to deal inter alia with the above mentioned components of the Jerusalem issue.
As to the question of sovereignty, one should remember the words of George Shultz written in 1990 in the context of the Middle East: "…Thinking must increasingly be on a region-wide scale. A little creativity about new mixes of sovereignty might help move the peace process forward…"8 The search for a compromise may be facilitated by the fact that the concept of sovereignty has undergone considerable change, and has become more moderate, due to certain developments: the process of democratization, the introduction of federalism into many states, the limitation of the right to use force, the development of the international protection of human rights, the permeability of borders, and the globalization in economics as well as communications9.
One could thus envisage certain compromise solutions for Jerusalem: joint, shared or cooperative sovereignty over certain areas; functional sovereignty, namely, sovereignty for the performance of certain functions only; mutual suspension of claims to sovereignty, attributing sovereignty to God10; or even agreeing not to agree on the question of sovereignty while establishing a detailed division pf powers and responsibilities11. Different solutions could be adopted for different neighborhoods. Since the parties may have difficulties to make concessions on the question of sovereignty, one may also have to consider the possibility of a deferred or staged solution. 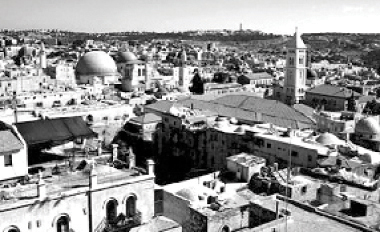 Regarding the subject of holy places, one has to remember that many people have difficulties in making compromises in this sphere. "How can a human being compromise over rights that belong to God?" they would say. However, it seems that one can reach solutions over rights at holy places, without offending religious feelings of the mainstream believers. It is crucial not to allow pious feelings to be exploited for political purposes.
In the absence of a legally binding general definition,12 there is a need to establish an agreed list of the holy places in order to prevent a proliferation of such places. A UN document of 1949 listed 30 holy places in Jerusalem13, while in 2000 a group of three experts found 32814. Holy places often enjoy a special status - like exemption from taxes, limitations on the powers of the local police, and sometimes a certain autonomy.15 The existence of many "enclaves" with such prerogatives may be a burden for the state authorities, and may also be exploited for political purposes.
In addition, it is necessary to make arrangements on the right of access and of worship as well as on the prevention of desecration and other harmful acts. These arrangements have to respect the "historical status quo" established by the Ottoman Empire, in particular by a firman of 1852, for a small number of Christian holy places16 - a regime recognized by both Israel17 and the Palestinians18. For those holy places that are holy for two or more religions or denominations, access and worship have to be regulated so as to allow all the groups for whom the place is sacred to visit and pray. The arrangements can be based on simultaneous access for all worshippers to different parts of the place, or non-simultaneous access to all parts according to an agreed timetable. Special provision has to be made for permitting and regulating pilgrimages. All arrangements for the holy places have to be subject to public order and decorum.
Mutual respect for each other's beliefs is indispensable. The fact that a certain event which a group attributes to a place could historically not have happened is irrelevant.19 What counts is what people believe in, and that is what has to be respected and taken into account. On the other hand, religious leaders should not "invent" new holy places for political purposes. An advisory council composed of members of the religious communities could help to enhance cooperation and understanding among the various religious communities.

Concerning demographic aspects, the heterogeneity of the population of the city contributes to the problem: Jerusalem is inhabited by members of about 40 different religious and ethnic groups. In order to allow each group a maximum of self-identification, the municipal administration could be based on a division into boroughs or arrondissements, each with a degree of autonomy.20

The relationship between Jerusalem and its periphery has to be dealt with in a pragmatic way. The city is a cultural center for both Israelis and Palestinians; it has an Israeli and a Palestinian university (the Hebrew University and the al-Quds University, respectively). Many people who live beyond the municipal area work in the city. Questions of access routes, water supply, sewage discharge and recycling have to be dealt with in coordination with the areas adjacent to the city. For all these reasons, Jerusalem should not be cut off from its periphery. Irrespective of the political status of the various areas, close technical, cultural, religious, economic and social (i.e., non-political) links between Jerusalem and its surroundings should continue to exist.
Last but not least, one has to take into consideration that many people have developed a strong emotional attachment to the city, and it has become of great symbolic significance. The relevant leaders should try to diffuse some of these strong feelings.
To conclude, great efforts should be made in order to find a compromise on Jerusalem. It may be helpful if the leaders try to lower the expectations of their people and remember that a win-win solution requires compromises.