Ali Abu-Shahla
Ali Abu Shahla is a Gaza businessman, Chairman of AA Consulting Engineers - Palestine. He is Vice Chairman of the Al-Aqsa University Board of Trustees, Vice Chairman of The Center for Democracy and Community Development, Jerusalem/Gaza and a member of the PIJ editorial board.

Almost all of the media talked about the Israeli and the U.S. request to Egypt to prevent the entry of both the head of Islamic Jihad, Ramadan Shallah, and his deputy, Ziad Nakhala to the Gaza Strip. Israel threatened to cancel the truce with Hamas, and even threatened to assassinate them if they entered the Gaza Strip .This request was positively considered by the Egyptian leadership, as well as by the two Jihad leaders, who didn’t join Khaled Meshal in his visit to Gaza .

This Israeli request did not include Khaled Meshal, and his deputy, Mousa Abo Marzook and Hamas leaders abroad who are visiting Gaza now, which means that there is a consensus between the Israeli authorities and the Hamas movement. It was announced that Israel had informed Egypt that it does not show any interest in the visit of Hamas leaders to Gaza, which means it would not target them during their visit.

Basic questions in connection to the visit

This visit makes it necessary to ask some questions:


* Will this visit open the way for Israel to accept to negotiate with Hamas shortly?
* Will there be acceptance and openness to Hamas from the West and a change the idea regarding considering Hamas as a terrorist movement, and that these countries will begin to talk with them?
* Do indirect talks between Israel and Hamas brokered by Egypt lead to the possibility of Hamas to getting rid of weapons that threaten Israeli towns with rockets and missiles (these weapons violate the terms of arming the Palestinian Authority according to the Oslo agreement)?
* Does this visit increase the strength and popularity, of Khaled Meshaal, and may it contribute to his re-election as the head of the Executive Committee of Hamas movement (Politburo)?
* Could this visit be considered as an introduction to start serious steps toward Palestinian reconciliation, after statements made by Khaled Meshal, and many of Hamas leaders (except Mahmoud al Zahar , who was not in favor), especially since the Hamas government had invited the leadership of Fatah in Gaza to participate in the reception for Khaled Meshal. The Hamas government had also invited the Fatah movement to attend the festival organized on Saturday, 8/12/2012 on the 25th anniversary of the founding of Hamas.
* In his speech after arriving in the Gaza Strip and in several speeches he delivered at the Rafah crossing, in the house of Hamas founder the late Sheikh Ahmed Yassin, at the house of Ahmed Jabari, and In the family house of Al-Dalou who lost 13 martyrs during the recent war on Gaza, Khaled Meshal declared that Hamas is looking for the unification of Palestinian politics after they already achieved unity among all Palestinian factions, which led to the victory in the resistance "Pillar of Clouds" war against Israel . This means a clear reference to the Hamas direction towards Palestinian reconciliation. 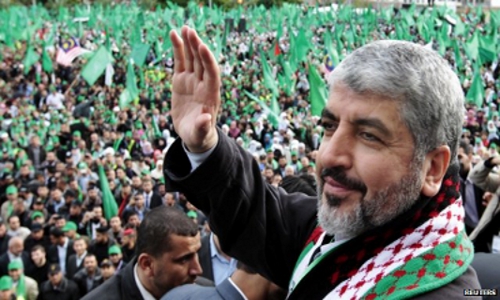 It is also important to study the speeches of Khaled Meshal, when he said that we are today in Gaza, tomorrow in Ramallah, and then in Jerusalem, and then visiting Haifa, Jaffa and the rest of the land of Palestine!! Khaled Meshal chose his words carefully, when he talked about his presence in Gaza, Ramallah and Jerusalem, but he used the word visit to Haifa and Jaffa, and in this context , he meant to put clear boundaries of the Palestinian state within the 1967 borders, and touring or visiting the Israeli cities (Haifa and Jaffa) meant that Hamas implied that it was looking forward to peace with Israel and a future in which he’ll visit the Israeli cities that are considered also as land of our forefathers belong only to the Palestinians ( Meshal in his speech in front of the Hamas festival said that Hamas is not recognizing Israel now and forever, and all what so called Israel is part of the Palestinian land belong to the Palestinians only !! ).

It is worth mentioning, that the celebration of Hamas this year is characterized by the presence of the leader of the movement Khaled Meshal, in addition to Arab and Muslim delegations: from Egypt, Jordan, Qatar, Bahrain, Malaysia and Indonesia, which confirms the importance of what will be the results of this celebration regarding the important decisions to be taken by Hamas, especially with regard to end the Palestinian division and the aspirations of Hamas to shift to political action shortly.

A change in the political map of the region is coming

I think that the coming months (after the Israeli elections in on January 22, 2013, and after the formation of the coming Israeli government) will see a clear change in the political map of the region, especially with regard to the continuation of the truce or not, with regard to the Palestinian reconciliation, and the revival of the political negotiations between the Palestinian Authority (after the achievement of the Palestinian Reconciliation) with the Israeli government to implement the two-state solution, which is backed by the United States , the EU, the West and Arab countries, as well as also by Netanyahu, who supports the two-state solution, but according to his own concept with regard to Jerusalem and the borders. Or we're going to observe a new Israeli targeting of Hamas and its attempt to eliminate the movement as stated by the Israel’s Minister of Foreign Affairs Lieberman. He is reported to have stated during the war on Gaza that the main goal of the war is to stop rockets from Gaza at Israeli towns, but also to eliminate Hamas. Will this be the goal of the new government that will be formed in Israel after the elections?


© 2023 Palestine-Israel Journal. All Rights Reserved. Articles, excerpts, and translations may not be reproduced in any form without written permission.