Emmanuel Seitelbach
Emmanuel Seitelbach is a candidate for the Masters of Arts in Human Security and Peacebuilding at Royal Roads University in Victoria, BC, Canada, and is currently working as an intern at the Palestine Israel Journal.

On June 7th, the Cross Borders Art Festival took place in Jerusalem, an event that – according to its organizers – constitutes a rare opportunity to foster friendship between Palestinian and Israeli teenagers. The venue was the Tantur College and Catholic University in East Jerusalem.

The event gathered together over 100 children aged 12 to 16 from Israel and the West Bank, and was sponsored by USAID and organized by volunteers from Seeds of Peace and Women of Action.

Teenagers recruited in high schools from places as remote as Haifa, Nablus, Tulkarem, or Tel Aviv, were asked to create a work of art around the theme - I Am From - using their media of choice. Their choices included techniques as diverse as visual arts like painting, drawing, sculpture, photography, literary arts like essay writing or poetry, performing arts like music, drama, film, or dance. The children proudly presented their accomplishment, in a solo or group performance, on the stage of the auditorium. It made up for quite a variety of productions, with astonishing creativity. One of the “I Am From” poems by twin brothers Waleed and Reda Janem was published in the PIJ issue devoted to The Younger Generation.

“Not by Power, But by Love” in 3 Languages

As the audience was waiting for a group stuck in traffic to arrive, Karen AbuZant, from the organization team, warmed up the crowd by asking quiz questions about national dishes, flag colors, etc., highlighting what the various communities already have in common.

For some groups of students, the creation of an art piece was an excuse to mingle with members of the other community in the city where they live, mixing languages in the same performance. The choir from the West Jerusalem YMCA was composed of Jewish and Arab children singing peace songs in English, in Hebrew (Hine ma tov uma nayim that describes how pleasant it is for brethren to dwell together in unity), and Arabic (the traditional Sufi melody Adinu bidinil hubbi: I follow the religion of love). A pleasant addition to their repertoire was the South African song Akanamandla, we have the power.

The audience was asked to join in for the singing in canon of a song saying “not by might, not by power, but with love” in 3 languages. 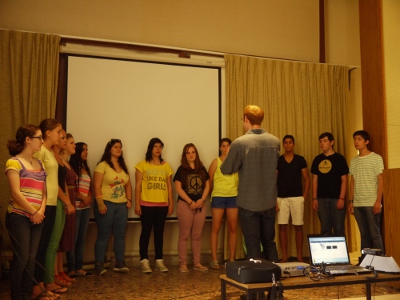 Four children from Jaffa, forming two couples from the Jewish and Palestinian-Israeli communities demonstrated ballroom dancing steps on the theme ‘Dancing in Jaffa’. Some children read inspiring verses from the Bible or the Quran.

During the lunch break, participants spread across tables were asked to talk about the origin of their name, its meaning, and the stories around it. Around one table gathered a Jewish girl from Modi’in, a new immigrant from Canada, and two Palestinian girls from the West Bank, including one whose family originated from Jaffa.

The afternoon session consisted of a series of games designed to induce the children to work together and accomplish an exercise requiring dexterity, drawing from their readiness for competition. Teams made up of children from various communities formed circles passing around objects like hula-hoops while holding hands. The objective of these exercises was to allow the children to focus on the physical challenge and contortions; the person next to a child that may belong to the other community becomes a partner in fun.

An art gallery was setup outside the auditorium where mosaics, paintings, and paper sculptures were displayed, showing cultural aspects of a community, photos of craftwork, favorite dishes, archeological sites, or scenes of daily life, including some disturbing ones: a cardboard model of a young girl holding on to a tree while a tank is pointing at her, another representing a farm house separated from olive trees by a concrete wall with Jewish settlements on a hilltop.

Using visual or literary art, some participants expressed the desire to convey their grievances to the audience through their poetry or PowerPoint presentations. Some talked about the fear of terrorism, demonstrations on the Temple Mount (Haram-al-Sharif), others about the oppression of the occupation. Conveying their narrative of the conflict and the impact on their daily lives is part of the healing process. This is the same principle that is being used in truth and reconciliation commissions like the ones that took place in South Africa, Kenya or Sierra Leone.

These children may become leaders and decision-makers

Apart from those wearing a distinct religious sign, it was difficult for an outsider to tell the difference between the Jewish and Palestinian children. They share the same eagerness for laughter and giggles at any opportunity. The event concluded over group photos, the distribution of diplomas and gifts. As Karen put it, if the only achievement of the day was to get these kids to accomplish something together, smile, laugh, and engrave the memory of a fun day amongst Jews and Palestinians, then this festival was a success. This kind of peace-building events at the grassroots level will gain all its importance when some of these children become leaders and decision makers in their community.

Seeds of Peace supports and facilitates educational projects, led by alumni of its Educator Programs, that inspire civic engagement and transform classrooms, schools, and communities. Seeds of Peace organizes local Bara’em el-Salaam (Sprouts/Buds of Peace) Camps for hundreds of young children in the West Bank and Gaza that introduce themes of civic engagement, leadership, and peace-building. Palestinian alumni from Seeds of Peace youth and educator programs work together to design and lead each camp.(Seeds of Peace)

Some of the volunteers present at the Cross Border Art Festival attended peace camps organized by Seeds of Peace in the USA and came back wanting to do something for their community: they created ‘Women of Action’.

Women of Action empowers women to play an active role in conflict transformation through training seminars and workshops focused on understanding and enhancing the role of women in peace-building. The group will also design and lead cooperative action projects to engage youth and benefit their communities.