Emmanuel Seitelbach
Emmanuel Seitelbach is a candidate for the Masters of Arts in Human Security and Peacebuilding at Royal Roads University in Victoria, BC, Canada, and is currently working as an intern at the Palestine Israel Journal.

In the summer of 2013, Obama sent yet-another-envoy to restart the peace process between Israelis and Palestinians, namely U.S. Secretary of State, John Kerry. For the past 20 years, more specifically since the Oslo agreement was signed in 1993 (the Declaration of Principles on Interim Self-Government Arrangements), successive Israelis and Palestinians governments have sat at the negotiation table, under pressure from the international community, in an attempt to make progress in formulating a mutually agreed arrangement for a two-state solution. And more often than not, these initiatives have been interrupted by an upsurge of violence, or the rotation of governments, with the same effect as someone pressing the reset button on the whole process.

While the Middle East is consumed by sectarian violence in Syria and Iraq, while Erdogan’s regime is facing a wave of discontent in Turkey, and Egypt is facing an acute social and economic crisis , why is it on the Israeli-Palestinian conflict that Obama is choosing to act?

One reason is simply that something can be done on this battlefront. It seems that the Israeli-Palestinian conflict is the backburner mission of American governments that resurfaces when trying to showcase the positive impact of their foreign policy in the Middle-East. By contrast, intervention in Syria is the most delicate decision to make; Iraq is currently America’s worst nightmare; and social issues in Egypt and Turkey are essentially domestic ones.

Another reason is the sense of urgency to resolve the oldest conflict in the region. Although the Arab Spring has shown that the Israeli-Palestinian issue is far from being the root cause of instability in the region, there is a sense that allowing the situation to simmer longer will lead to major deterioration on the ground.

There are only four avenues for the parties to this conflict to pursue:

1. The continuation of the status-quo

Of these four options, only one is actually viable: the two-state solution.

The status-quo means the continuation of the occupation of the West Bank, with a steady increase in Jewish settlements. The construction of new houses does not constitute a problem in itself, as Palestinians could move into the buildings after an evacuation, unlike what happened during the evacuation of the Sinai and Gaza Strip, where the buildings were destroyed. The problem resides in the settlers’ growing demography that could render an evacuation impossible and therefore permanently prevent the implementation of the two-state solution.

The status-quo also means the perpetuation of land grabs, restrictions of movements, checkpoints and the humiliation that comes with them, more unilateral initiatives from the Palestinian side, like the UN observer state recognition of Palestine, ‘lawfare’ in the arena of international judicial institutions, boycotts, general strikes, and delegitimization campaigns, leading to more retaliations by Israel in the Palestinian territories, like retention of tax revenues or travel limitations. Ultimately the main casualty of this kind of escalation is the deteriorating Palestinian economy. Right after 1967 and before the Oslo initiative, the Palestinian economy, under Israeli occupation, was based on exports of farming and manufactured products to Israel, Jordan, and overseas. Palestinian workers commuted regularly to seek employment across the Green Line. Palestinian prosperity indicators were at a peak during the 20-year period of 1967-1987 amongst four equal length periods between 1927 and 2007. After Oslo, and the Second Intifada, the economy dangerously drifted towards an economy of dependence on foreign aid. A continuation of the status quo, donor fatigue and the absence of a sustainable economy could plunge the territory into a severe economic crisis. Disgruntled Palestinians could resort to violence against both Israel and the Palestinian Authority (PA), pushing Israel to multiply checkpoints and territorial closures, and possibly bringing the collapse of the Palestinian Authority (PA) replaced by complete chaos; Israel would be responsible to govern the West Bank as the occupying power, as in the pre-Oslo situation. This scenario of spiraling violence becomes more realistic as the status quo is extended. 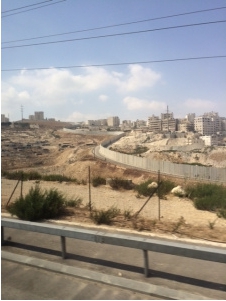 The separation wall near checkpoint 300, north of Bethlehem

The one-state solution is not a viable solution. The State of Israel with its current institutions cannot remain both democratic and a Jewish state with a Jewish minority ruling a majority of Arab citizens. Israeli Jews are attached to the institutions of their one-and-only state. This is simply the result of having experienced 2000 years of submission to the whims of rulers often hostile to their Jewish minority, throughout the Diaspora. The latest example was the state-sponsored persecutions of Jews under the rule of Hugo Chavez in Venezuela . If the one-state solution was adopted, what would prevent an Arab majority from voting for an Islamist candidate Prime Minister that would establish Shariah Law and relegate the Jewish minority to the status of dhimmi, with the same precarious conditions as Christians of Egypt , Iraq, or Pakistan . The only way to prevent this scenario would be a form of Apartheid where the Arab majority does not enjoy the same rights as the Jewish minority.

The two-state solution is the ‘least bad’ solution. It will respond to the two nationalist aspirations and allow for the end of the occupation and all the humiliation and despair that comes with it. Many issues need to be resolved such as the implementation of the ‘right of return’ in a realistic way, the Fatah-Hamas reconciliation, and more importantly, borders finalization and the evacuation of settlers.

As of 2008, while then Prime Minister Ehud Olmert was leading the Israeli negotiation team, Israel offered to transfer 5.8 % of Israeli territory to the Palestinian state, while Israel would annex 6.3 % of the West Bank. The Palestinian negotiators expressed their preference for Israel to retain only 1.9 % of the West Bank beyond the Green Line. As of 2011, the settlers’ population had reached 350,000 in the West Bank and 200,000 in East Jerusalem. Whether the final land swap is closer to 1.9 % or to 6.3 %, the number of settlers to be evacuated will be in the hundreds of thousands. This is not a simple task. Settlers will refuse to leave and resort to violence as they have done in the past. With the sheer number of settlers involved this time around, this could destabilize the state of Israel, as some soldiers or policemen could refuse to enforce the evacuation, creating a situation of conflict at home. But just as importantly, housing infrastructures have to be in place inside Israel to accommodate the evacuees. This comes down to creating a mid-size city like Minneapolis, Minnesota, out of nowhere, or expanding suburbs of existing cities by the same amount of homes…It is a massive endeavor that needs years to complete.

Still, there are reasons to be optimistic as leaders on both sides have stated, back in 2008, that the parties were just months away from a peace agreement. This optimism is strengthened by new developments coming from the Arab League. The Arab Peace Initiative that was first presented to Israel in 2002 has now been amended with a clause to include land swaps between Israelis and Palestinians. This constitutes a form of guaranty that if Israelis and Palestinians reach an agreement for a two-state solution, the Arab world will embrace it, and potentially normalize its relations with both states.

Pessimists argue that once the two-state solution has been implemented, extremists from the Hamas and Islamic Jihad militia, who disagree with that solution, will waste no time in trying to take over the West Bank and start launching rockets towards Israel from the East. This is precisely the fear of Netanyahu when he claims that the conflict is not territorial and requests a guaranty that implementing the two-state solution means that *the conflict is over once and for all*. But if Israel’s territorial security is jeopardized after implementing the two-state solution, the Palestinian leaders will no longer have the sympathy of the world community and will be held responsible for not exerting control over their country and not reining in their extremists. Sanctions could be exerted to restore calm. Israel has the military might to intercept all flavors of missiles and mitigate the threat until calm is restored. A continuation of hostilities by marginal groups, after a two-state solution has been adopted, is a serious risk, but the risk of doing nothing far exceeds this one.

As for the three-state solution, this is a variant of the two-state solution in the case where Fatah and Hamas are unable to bridge their gap; hence the Gaza Strip and the West Bank would constitute two separate political entities. This is not a desirable outcome because, amongst other reasons, this would make the West Bank a landlocked nation highly dependent on Israel or Jordan for its access to the sea for trades. The Oslo peace negotiations between Abbas and Olmert planned for a train or road connection between the West Bank and Gaza, that resolves the issue of a port access for the West Bank, and therefore, having the Palestinian leaders reach reconciliation is paramount.

A Sense of Urgency is Needed

Reviving the peace process and promoting the two-state solution rather than the other alternatives are critical to avoid the worse case scenarios presented above. This revival is necessary as the Israeli society has become apathetic to the issue. Ever since violence has become sporadic compared to the early 2000s, due to the military supremacy of the Israel Defense Force (drones, security barrier, Iron Dome defense system), a sense of urgency has withered. On the Palestinian side, a sense of despair has resulted from the economic downturn, high unemployment, and a loss of confidence in the PA leadership’s ability to bring a decent livelihood to the population.

With Kerry’s efforts to reach out to the two sides, they have finally returned to the negotiation table. Expectations are low as distrust is high between the two camps, but a failure to reach an agreement will be difficult to explain to the public and could lead to a return to violence.