"How can we have peace if we don't build relationships?," asked young Ezeibe Ikenna when we facilitated 200 African adversaries captured on film in DIALOGUE IN NIGERIA: Muslims & Christians Creating Their Future." 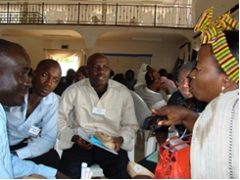 Why can't we see that "wanting" peace means pursuing citizen-driven, heart-to-heart human engagement that finally frees the brain to think properly? What blinds us to miss the point that change is not going to happen first among governments and political personalities?

We are living and re-living olden days and failing ways. Un-distinctive calls for vengeance manipulate fear and selfishness while creating more victims during these times of enacting the most primitive of ourselves cloaked in egocentric nationalism, religion, and rationalized self-righteousness.

Yet neither fury, distance nor technology can keep us safe. Only dependable relationships can do that.

To be clear, blaming "leaders" misses the larger, harder-to-face reality. Today's inhumane events reflect the will and condition of the majority of us, citizens who elect and re-elect our political policy-enactors.

WE, the people, are killing, humiliating, disregarding, and excluding one another. We are able to acutely feel mostly our own pain and aspirations, but nearly inept at embracing an "other" especially in difficult times. Our problem is personal, not "out there," and the antidote and preventive are personal, too.

This death of empathy and spirit is a symptom of near-total—except for rare, shining exceptions—disengagement of people and a poverty of human relationships across borders and including within the State of Israel.

This killer worse than HIV/AIDS is HRV—Human Relationship-deficiency Virus. Replacing our poverty of relationships and famine of communication skills with sustained dialogue among and between us is the entry point to experiencing equality and dependable human security.

The Modern Struggle for Change: Painting a picture of changed people

"The people must first paint a picture of what we want life to look like." Former MK Maj. Gen. (ret.) Ami Ayalon clarified. "No people or nation is going to go down a road where it cannot visualize what life is like around the corner." 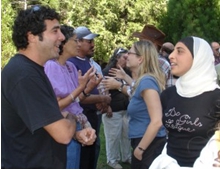 Thus, the new, modern struggle is with engaged Palestinians and Jews together becoming artisans of communication, listening-to-learn, dignifying (not harming or humiliating) one another - genuine neighbors - whose compelling successes empower governments to be creative and succeed. 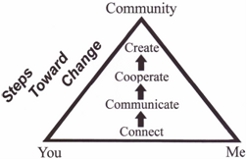 Abandoning our lives into the required-yet-missing public peace process of face-to-face, citizen-to-citizen engagement, we humanize and experience authentic trust among ourselves. Even inside Israel, only a tiny portion of Arabs and Jews have relationships of any depth. In these 2000’s, The Citizen's Century, it is our destiny to engage in authentic community—be history-changers.

Peacebuilding: Choosing a life of engagement

This life of helping people know each other in depth is for everyone, even us two garden-variety citizens. It requires only deep interest, moving toward people, dedication to the long-distance run, and deciding to export solutions—painting a living picture of life when empathy is the prevailing human function and sharing how-to examples and tools for others.

Traveling in 1984 to the enemy Soviet Union to meet our Russian adversaries, we first realized that nothing replaces face-to-face relationships. Our so-called adversaries were gracious, cultured, generous, and inventive—easy to relate with, quickly and deeply. Stereotypes atrophied, as portrayed later in Deb Reich’s 2011 prophetic book, No More Enemies.

Since 1992 our 22-year-old Jewish-Palestinian Living Room Dialogue in California, preparing for its 268th meeting, has continued validating collective creativity and the supreme value of sustained intimacy leading to hundreds of examples of community, national, and global outreach events. The step-by-step deepening and outreach is documented in film streaming online.

In 1993 and for five years, dialogue was created with Jewish Camp Tawonga, the successful Palestinian-Jewish Family Peacemakers Camp near Yosemite National Park in California. Hundreds of Muslims, Christians, and Jews from 50 towns in Israel and Palestine experienced living together and communicating as they never had imagined. The impossible became possible, with a safe place, a little help, and courage. The resulting how-to film was PEACEMAKERS: Palestinians & Jews Together at Camp. Its DVD is in 85 nations on every continent. 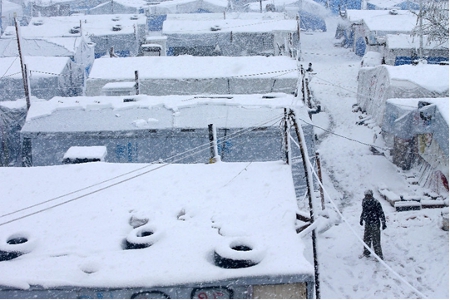 “Let’s stop importing problems and begin exporting solutions,” was the prescription of Ken Kramarz, Camp Tawonga’s visionary director. Decades earlier E.F. Schumacher had advised us how to wisely use our energy not slaying the dinosaur but inventing the gazelle.

In 2010, more "gazelles"—and another instructional film—resulted from our facilitating 200 brave Muslims and Christians healing together in West Africa. Like other documentaries created by this handful of California relationship-builders, DIALOGUE IN NIGERIA: Muslims & Christians Creating Their Future now provides practical tools and living exemplars of the entry point to life beyond violence, including for reconciliation citizen-innovators in Cote d’Ivoire, DR Congo, and northern Nigeria. 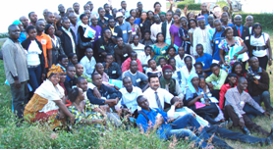 Similar human success stories are becoming the new “hard news.” They are the concrete prelude to a new wave of practical education and courses like Peace Journalism championed at the University of Sydney and Park University in Missouri.

These are the new facts of life—principles and daily practices of peacebuilding are sowing among Mother Earth’s people seeds of hopefulness and hunger for the ecstasy of communication and reunion.

After 47 years of marriage and three decades of helping adversaries become partners, it’s our experience that social intercourse is just right for living together with our diverse—neighbors forever.

"The soul's oldest memory is of union. And the soul's deepest longing is for reunion." from DIALOGUE IN NIGERIA: Muslims & Christian Creating Their Future (2012)