A delegation from the Heavenly Culture, World Peace, Restoration of Light (HWPL) initiative based in South Korea recently visited the Middle East and Africa. While the whole world calls for peace and reconciliation in the Middle East region, the delegation led by Mr. Jae Seob Jee, Executive Director of HWPL, carried out a 30-day peace journey which began on April 27 2015. During the journey, they visited several Middle Eastern and African countries including Israel, Lebanon, Jordan, Ethiopia, Egypt, Bahrain, Qatar, UAE and Kuwait. The representatives attended an array of diverse events from youth peace walk festivals and gender equality conferences, to interviews with corporate broadcasting representatives of each country.

From September 17th-19th, 2014, HWPL hosted the World Alliance of Religions’ Peace (WARP) Summit in Seoul, South Korea. Approximately 2,000 representatives including international political figures, as well as religious, women’s and youth group leaders, attended the summit along with over 200,000 HWPL members from all over the world to call for an end to war and world peace. After the WARP Summit, countless invitations from war torn states all over the world flooded the HWPL offices pleading with the organization to implement peace-building processes in their respective countries. This visit to the Middle East was in response to these requests. What follows is a brief report about the delegation's visit to the various countries in the region:

Israel- April 30th was a meaningful day as Mr. Jee, Executive Director of HWPL, delivered a hopeful and inspiring speech to the youth at the Mar Elias Educational Institution in Ibillin. Mr. Jee had the opportunity to introduce the peace achievements of HWPL to over 100 students, as a witness to the peace initiatives of HWPL chairman, Mr. Man Hee Lee. As Mr. Jee appealed to the youthful audience, he reminded them of Mr. Lee’s request that today’s youth “must become the peace advocates in this generation.” The WARP Offices, founded by Chairman Lee, an international peace advocate, has now expanded its outreach with over 6o offices across 39 countries including the U.S., UK, Australia, India, Philippines and South Africa. A gathering of religious leaders representing the Christian, Judaic and Islamic faiths was also convened to discuss the correlation between religion and peace. 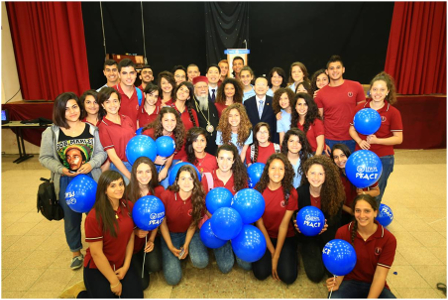 Meeting with youth at Mar Elias in Ibillin

Lebanon- On May 9th, the delegates were invited to a meeting of 30 religious leaders with the Eparchy of Sidon. Participants were introduced to the work of HWPL by watching the highlights video of the last WARP Summit and listened to the message of Mr. Lee on the importance of religious leaders in establishing peace. Afterwards, they all promised their active collaboration with HWPL. 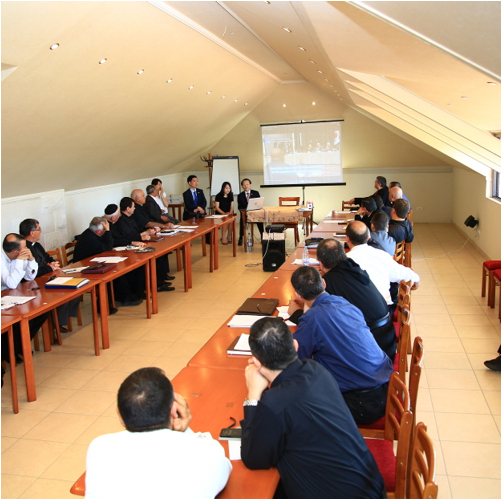 Meeting with 30 religious leaders in Sidon.

Bahrain- On May 18th, religious representatives from Hinduism, Islam, Sikhism and Christianity gathered to sign a peace agreement. Moreover, the WARP Dialogue was followed by meetings with youth and women group leaders and politicians. Inspired by the delegates’ activism, they all agreed to cooperate with HWPL in the hope of fostering a more peaceful world.

Dubai, the United Arab Emirates- Religious leaders gathered for the World Alliance of Religions’ Peace (‘WARP’) Dialogue on May 24th 2015, in Guru Nanak Darbar. This time, 25 religious leaders representing Islam, Sikhism, and Christianity discussed the concept ‘of peace based on scriptures.’ All the representatives in this meeting emphasized the necessity of communication amongst religions. 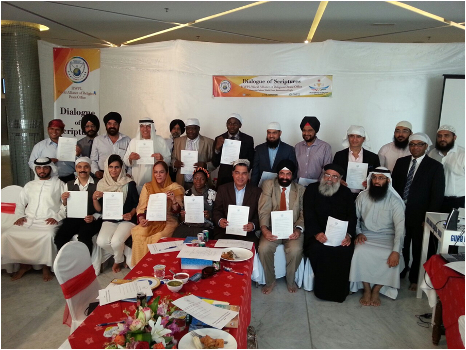 Kuwait- On May 25th, 'International Peace Youth Group Walk festival’ was held for the 2nd Annual Commemoration of the Declaration of World Peace. The event was hosted by the Kuwait House and sponsored by Kuwait’s Ministry of Interior. The commemoration was simultaneously held all over the world, in over 50 cities across 30 countries including Seoul, New York, San Francisco, and Berlin. In the commemoration ceremony, youth supported the enactment of an international law to end wars and promote the value of peace.

The visit of HWPL’s delegation was a journey which bore witness to the fruits of cooperation between those who love peace in the region. It was an opportunity to not only learn about the people and their desire for peace that transcends religion, race, and gender, but also to reaffirm Mr. Lee’s statement that everyone has a peaceful heart. The initiatives of HWPL following this visit are now being watched with keen interest.