Erez Bleicher
Erez Bleicher is a political commentator and activist currently interning at the Palestine-Israel Journal (PIJ) while living in Jerusalem for five months with Achvat Amim (Solidarity of Nations). He has participated in various campaigns for racial, economic, and gender justice in Chicago and you can find more of his writing at his blog Golem Theory.

Prominent scholars and civil society organizers joined together at the American Colony Hotel on December 21st for an evening of lively discussion in celebration of the latest issue of the Palestine-Israel Journal (PIJ) devoted to Young Voices in Jerusalem. Speakers painted a rich picture of the conditions young activists contend with in this bleak time of violence, resilience, and shattered expectations. They unpacked the morbid realities these activists negotiate daily and highlighted the clarity, vitality, and transformative possibility they embody despite the hardships they must overcome. The speakers included executive director of Ir Amim Yudith Oppenheimer, director of Near East Consulting Jamil Rabah, researcher Yuval Piurko of the Zofnat Institute for Consulting, architect and urban planner Tariq Nassar of IPCC Jerusalem, veteran Jerusalem activist Shalom Boguslavsky, social entrepreneur and media consultant Yossi Saidov of Tag Meir, and project manager at Al Quds University Nadia Harhash. The event was hosted and moderated by co-editors of the PIJ Hillel Schenker and Ziad AbuZayyad. 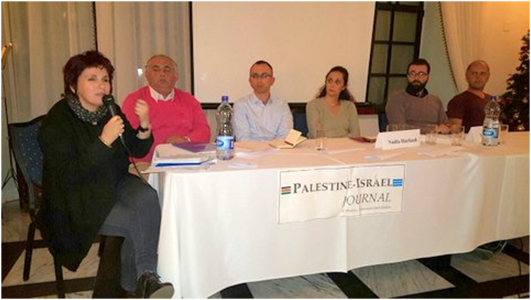 Jamil Rabah opened the evening by drawing attention to the encompassing alienation young Palestinians in East Jerusalem feel toward all immediate political establishments. They of course resent the overt hostility of the Israeli state and are increasingly disillusioned by the impotent Palestinian Authority (PA). Rabah said that while most see East Jerusalem as the future capital of an autonomous Palestinian state, they also fear that the quality of services in East Jerusalem would decrease if the PA were charged with their administration. Caught between two political regimes with ambivalent commitments to their communities, young East Jerusalemites are left struggling with issues of housing, education, and healthcare with no immediate recourse on the horizon.

Yuval Piurko contrasted this poignantly with the realities and perspectives of young civil society organizers in West Jerusalem. After conducting a survey of over seventy professionals in the West Jerusalem civil sector between the ages of twenty four and forty four, he found that the majority support a two-state solution but are not working in organizations that actively work toward its realization. This represents a gap between personal conviction and organizational policy that must be bridged if progress toward peace is going to be made. Piurko said that while the majority of the respondents believe Palestinians in East Jerusalem are deserving of a proportionate distribution of city services (even at the expense of West Jerusalem), they understand that this will never occur without responsible action by West Jerusalem organizations.

Following these preliminary remarks Tariq Nassar and Nadia Harhash both spoke powerfully about the precarious condition that characterizes life for young East Jerusalemites today. According to current policy East Jerusalemites must prove that the city is their "center of life" or risk losing their status as permanent residents. Nassar recounted that when he went outside of Israel-Palestine to study he was unsure if he would be allowed to return and that this constant fear of displacement creates a permanent refugee mentality for East Jerusalemites.

Harhash echoed this sentiment by saying that "there is no safe space to be a Palestinian Jerusalemite." She recounted that the precarious residency status of her children lead her to attempt a conversation with her family about the idea of applying for Israeli citizenship this past year. She was surprised to find that it was her young children who refused the notion categorically and shunned the normalizing effects of such a process. It was a powerful reminder that East Jerusalem youth were politicized irreversibly following Israel's assault on Gaza last summer and that the daily violence they experience leads them to strong political positions. Harhash said that their identity as Palestinians has been shaped by the actions of Israel over the past year and that despite their vigilant political awareness their desperation sometimes leads them to acts of self-destruction.

Yossi Saidov and Shalom Boguslavsky discussed the ways young Jerusalem activists are transforming realities on the ground without appealing to abstract frameworks of peace. In an insightful moment of analysis Boguslavsky remarked that after the failure of the Oslo Accords to bring peace an older generation of organizers turned to an "activism of despair." They became so disillusioned that they proselytized pessimism, inaction, and paralysis. In contrast the younger generation rejects despair but realizes that you cannot keep hope alive by resorting to the same failed tactics as their predecessors. Both agreed that in the last fifteen years civil society organizations have determined to take the future of Jerusalem into their own hands. Where the prior generation sought to change the policy of the state this generation in Jerusalem seeks to build the reality they seek on the ground (as when activists in East Jerusalem began constructing a neighborhood park without the permission of authorities).

This has created what they both agreed is the youngest, most dynamic, most original civil society in Israel.

The presentations were followed by a stimulating question and answer period with the many Israeli, Palestinian, and international audience members who attended despite the tense atmosphere in the city. Among those who asked questions and made comments from the audience were former Jerusalem Deputy Mayor Yosef (Pepe) Alalo, researcher and Palestinian Jerusalem expert Dr. Adnan Abdelrazek, and various leading Jerusalem civil society organizers. 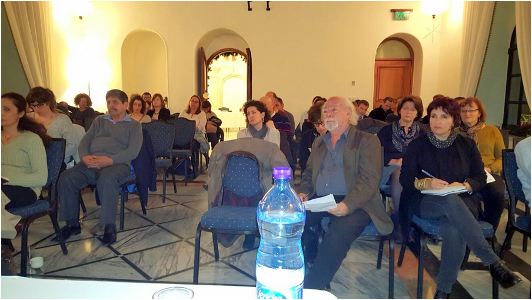 As a whole the evening provided a measured and nuanced reflection on the unprecedented limitations and possibilities young activists contend with in the current historical moment. Yudith Oppenheimer was correct when she observed that the present political context brings great opportunity and great burdens for young activists to face. And Yossi Saidov offered what was perhaps the perfect closing words of the night when he reminded the audience that in "Jewish tradition there are two Jerusalems: one in the sky and one on Earth. While everyone is thinking about the city in the heavens the one on the ground is crumbling." Young activists in Jerusalem are establishing the city they want in the here and now and building a new world on the ground.