A book launch for Bernard Sabella’s latest book, titled A Life Worth Living:The Story of a Palestinian Catholic was held on Tuesday September 25th at the Swedish Christian Study Centre just inside the Jaffa Gate in the Old City. The meeting room was filled front to back to hear the Jerusalem veteran share stories from the book itself but also discuss relevant topics that are not featured. Sabella, who has contributed numerous times to the Palestine-Israel Journal, offers an interesting perspective on what life is like for a Palestinian Christian.

Sabella began his presentation in Jerusalem during the 1950s. He called this era the “best part of my life” because, although his family had certainly experienced trauma and depression after having become refugees from their home in the Katamon neighborhood of West Jerusalem in 1948, they carried on with life as always and made the best of their situation in a Jerusalem that was relatively peaceful at the time. Sabella’s family are Palestinian Christians, inhabitants of the Christian Holy Land for many years before the arrival of Zionism, and he stated how his parents never seemed to hold anger toward the Jews but felt a sense of betrayal toward the British and Americans, fellow Christians who left Palestinians out to dry.

Sabella told stories of his childhood in East Jerusalem, describing the French Catholic school he attended and the strict manner of the brothers who operated the school. One fascinating story of Sabella’s childhood is the controversy over the cinema coming to Jerusalem. Conservatives saw the cinema as the work of Satan, while liberal Jerusalemites were overjoyed at the prospect of global cinematic culture being brought to the holy city. The brothers at the French school were not fond of the cinema, even sending out spies to see which pupils attended the Sunday afternoon showings and questioning the boys when they returned to school on Monday. Sabella, who answered honestly about his visit to the cinema, was spared punishment while the boys who attempted to lie received a strict punishment from the brothers in charge. This enlightening tale shows what life was like in the 1950s for young Palestinian Christians enjoying modern culture while receiving a rather traditional Christian education run by Europeans. 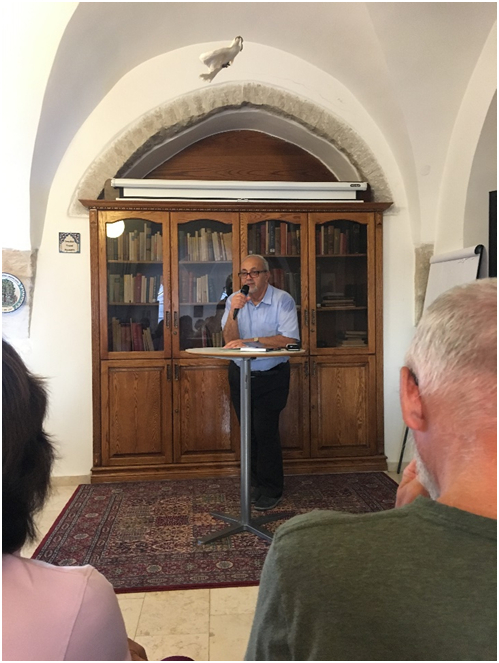 In the 60s, Sabella went to America for the first time as part of a writing contest and ended up attending a small liberal arts college in Pennsylvania. At this college, nearly half of the student body was Jewish, and as Sabella became acquainted with his Jewish peers, he started to wonder why these young progressives were so adamant about their stance against the war in Vietnam and their passion for social equality, while at the same time completely ignoring the plight of the Palestinian people. Following the 1967 war, many Palestinians, both Muslim and Christian, began to say “God has abandoned us”, to which Sabella replied, “No, God has simply been taken prisoner by an Israeli tank.”

Sabella then moved to Princeton University, noting how the east coast elite were very condescending. During his time at PU, the university hosted Edward Said and Hanan Ashrawi, something Sabella was very excited about, a chance to hear two leading Palestinian intellectuals speak to an American audience. Sabella noted how whenever an American institution brings a Palestinian to speak there is always an Israeli counterpart there to speak, but the same institutions have no problem hosting an Israeli without a Palestinian counterpart.

Sabella then recounted his move to Bethlehem University, where he felt compelled to teach sociology to his people, rather than accepting an appointment at an American university.. After travelling multiple times to the Vatican to promote Muslim/Catholic dialogue, Sabella decided he wanted to join the political scene in Palestine, a difficult transition because he had no experience in politics. With the help of his brothers and sisters, Sabella won one of the 6 Christian quota seats in the Palestinian Parliament, despite receiving only 4,000 votes in Jerusalem, much less than some of the Muslim candidates. Sabella sought to move past simple dialogue, believing little action was being taken while politicians sat around and dialogued.

Sabella said the purpose of writing his stories and thoughts for this book was to attempt to reach out to a western audience, especially Americans, and tell the story of a Palestinian Christian, hopefully relating to other Christians around the world and garnering support and empathy for the Palestinian cause. Sabella noted how most Americans do not see Palestinians as Christians, despite having inhabited the holiest Christians lands for more than 2,000 years, and he chastised Americans for seeing Palestinians as terrorists, rather than a “people with culture, history, and traditions.” He closed his time with a message to Palestinians everywhere, “Keep writing your stories.”

The session closed with a short dialogue with the audience members. One Palestinian Christian woman insisted Palestinians should keep speaking up, and blamed some Palestinians for not using their platforms appropriately. Sabella responded by agreeing that they need to continue to have their voices heard, but not to blame Palestinians for their plight. Sabella continued by recalling a recent trip to France where he stayed in a Jewish neighborhood. He found the environment refreshing because he could look at the Jews simply as people and families, not the occupier.

The event was a great success thanks to the workers of the Sweden Christian Study Centre, all those who attended, and of course the wonderful speaker Bernard Sabella. His stories and anecdotes from the past were witty, insightful, and relevant to the ongoing struggle of not only Palestinian Christians but Palestinians around the world. Following the event, many of the audience members went upstairs to take in the wonderful view from the terrace and discuss the event, enjoy a cigarette and watch the crowded streets of the Old City as thousands flocked to Sukkot celebrations.

The book A Life Worth Living: The Story of a Palestinian Catholic is available on Amazon as well as in the Education Bookshop on Salah-a-Din Street and at the American Colony Hotel. 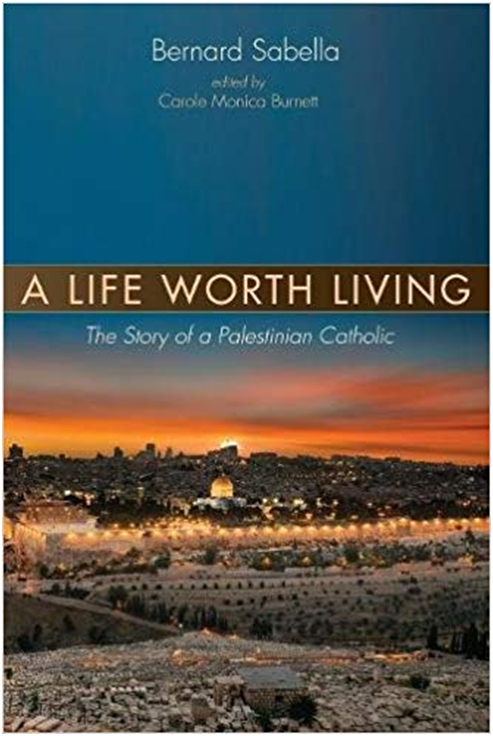