An event was held on October 2nd at the American Colony Hotel to discuss the recent passage of the controversial Nation-State Law in the Knesset. The stimulating panel discussion was hosted by IPCRI, Israel/Palestine Creative Regional Initiatives, and featured a crowd of predominantly Israeli and international guests. The event came one day after a general strike was held by Palestinians in Israel and in the Occupied Territories in protest of the law along with other issues. 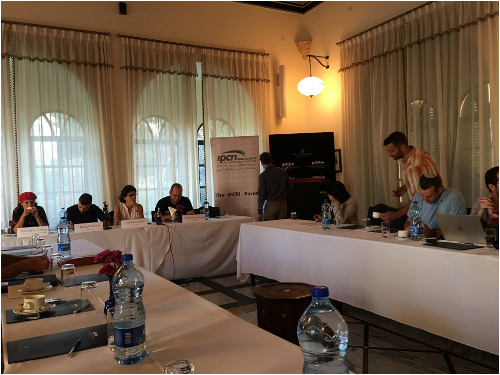 Getting ready for the panel discussion at the American Colony Hotel (Photo: Andrew Hebert)

The first speaker of the event was Chaim Levinson, a correspondent for Haaretz who covered the West Bank for many years and is now the political correspondent covering the Knesset. Levinson offered a general background regarding the global context of the law and the implications it would have for the upcoming Israeli elections. He described the Nation-State Law as a tactic for Netanyahu to clearly label who is with “us” (true Israelis) and who is against us (anyone who disagrees, Palestinians, leftists, etc.). He compared this tactic to the debate taking place regarding the national anthem in the United States at sporting events, where right-wing politicians have hijacked the conversation and steered it away from the issues it was originally meant to address, issues like police violence against African-Americans and overall systemic racism and instead using it to label the protesting athletes and others as anti-America and anti-troops. Levinson argued both examples fit into a larger trend of populist right wing politicians using ethnicity and other factors to create a clear us vs. them landscape to push simple, rigid dichotomies onto voters.

The next speaker was Sawsan Zaher, a Palestinian citizen of Israel and human rights lawyer for the organization Adalah which works to protect Palestinian rights at all levels of the Israeli judicial system. Labeling Israel as an “undemocratic Jewish state”, Zaher placed the Nation-State Law alongside other legislation, including the Nakba Law, a law that forbids public entities from funding or acknowledging the Palestinian day of remembrance known as Nakba Day, a day alternatively celebrated as Independence Day in Israel. She argues that these laws are intended to discriminate against and remove the heritage of the 1.5 million Palestinians living within the borders of Israel. Zaher also argues the Nation-State Law imposes Israeli constitutional identity upon “Eretz Israel”, a term that refers to the occupied West Bank as well as the State of Israel. She also cited a clause in the law that states the right to self-determination in Israel is a uniquely Jewish right, claiming this to be a statement that clearly excludes the minority communities in Israel like the Druze and Palestinian peoples. Zaher continued by citing two other constitutional examples where large groups of people were not considered to be a part of the “we” in the famous constitutional phrase, “we the people”. The first example being the French constitution in the late 18th century which excluded women, workers, and slaves, and the second example being the Dred Scott Supreme Court case in the United States which reinforced the exclusion of African-Americans from the protections of the US constitution. Zaher finished by saying the law did not change the reality of the situation for Palestinians in Israel but does change the context of how to legally challenge all forms of ethnic discrimination and makes legal arguments more complicated and difficult to pursue. 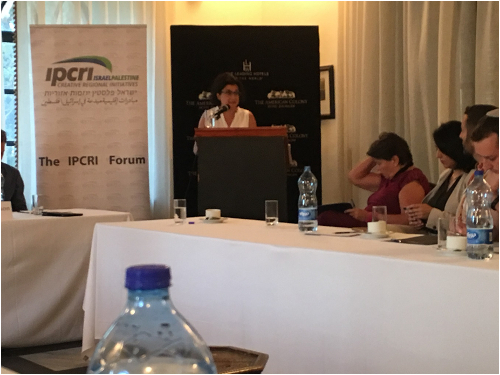 New voices among the Druze

Balig Sladeen is a young Druze man, popular on social media as an activist and correspondent for i24 News, who grew up attending Israeli schools and waiting for his father to return home from his service in the IDF. As a child, he knew nothing of the Palestinian struggle for equality, but as he advanced through adolescence he began to discover and sympathize with the Palestinian cause. Sladeen chose to not join the IDF, despite most of the Druze community historically serving in the military. He added that he was “happy about the Nation-State Law” because it woke up the Druze community to their reality as an oppressed minority in Israel. Sladeen addressed identity problems within his community, expressing their Arab connection to the Palestinian people which is often trumped by their commitment to serving the state of Israel. The law discriminates not only against the Palestinian minority, but against all minorities, including the faithful Druze people. Sladeen finished his speech saying, “I would rather be oppressed with the oppressed than equal to the oppressor.”

“The law is a reflection of reality”

The final speaker was Tehila Frideman, an Orthodox Jewish woman, activist, feminist, and lawyer. Frideman started off by saying she believes the law does not change reality but reflects it. She then offered her assessment of how the Israeli people see the law not as a version of apartheid, despite accusations from the international community comparing it to South Africa. Commenting on Levinson’s assessment of the global situation, Frideman sees these attempts at defining “we” as a reaction to the global immigration crisis which has caused identity crises for nations around the world. Frideman proceeded to address the modern conflict between liberal democracy and multiculturalism, saying that multiculturalism will infringe on the rights of individuals that are supposed to be promised by liberal democracies, especially regarding women. Frideman finished by saying the Nation-State Law was simply an attempt to protect Jewish culture as imagined by Israelis and is a result of the growing push for anti-cultural liberal democracy.

Following the presentations, the panelists fielded a round of questions from the audience, with the general theme being, where do we go from here? The panel agreed that the Supreme Court will most likely not overturn the legislation, but Zaher said that would not stop Adalah from trying. Frideman claimed that the law did aid in opening the discourse surrounding a solution to the conflict and has prompted new creativity for resolving issues.