The Old City’s Souq (open-air market) is an often-overwhelming collision of competing visuals. Its optical milieu is rooted in Jerusalem’s status as the meeting point of a wide range of cultures, as well as the market’s thousand-plus year history. One of the most jarring manifestations of this reality is the merchandise sold there; in shops across the souq, kuffiyehs hang next to tallits. The t-shirt vendors sell “Free Palestine” designs, and also “Guns’n ’Moses”. Food carts offer rugelach next to ka’ak, and postcards of the Dome of the Rock are for sale next to pictures of the Western Wall. Merchandise choices in the souk often seem so hyper political and contradictory as to cancel each other out.

Why do merchants sell such contradictory items? How do they balance such choices with their political opinions? And what do such decisions say about their attitudes towards a future peace? I went with these questions to the souq, hoping for answers from the merchants themselves. Passing from Jaffa Gate to Damascus Gate, I made my way through the market, looking for people willing to talk. I interviewed nine people, men and women, Muslims, Christians, and Jews, in conversations ranging from five minutes to over half an hour, and through their voices, a picture started to come together. 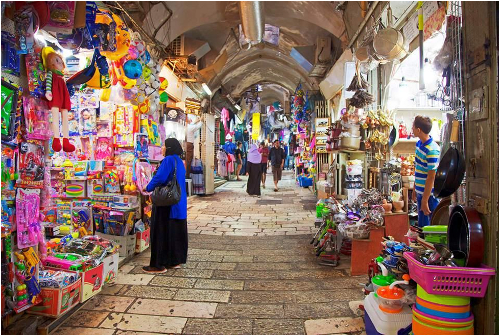 “Free Palestine” and “Guns’n’Moses” designs are side by side in the Old City Souq.

Economic Malaise in the Souq

The first cause of the merchants’ contradictory offering of products, one that quickly became clear, was the souq’s economic malaise. As one Palestinian bakery owner told me bluntly, business was simply “very bad”. This is not news in Jerusalem, where more than 40 percent of the population lives below the poverty line, but the Old City market seems to face particular difficulty. Abdullah, a sweets shop owner near Damascus Gate, gestured toward the nearly-empty walkway and said that, in his estimation, his customer base was only fifteen percent of what it was some thirty years ago.

These economic challenges stem primarily from a radical shift in clientele over the last twenty years. A combination of the Occupation, the Second Intifada, and the construction of the Separation Barrier has driven both Palestinians and Israelis away from the Old City market and into areas deeper in their respective territories, mainly Ramallah and West Jerusalem. This has been compounded by a cultural shift among the youth of both populations, who prefer upscale malls, and online shopping to the atmosphere of the souq.

With local markets evaporating, the souq has become increasingly dependent on foreign tourists. Tariq, a Palestinian Muslim who owns a shop near Jaffa Gate, explained to me the ramifications of this change. He is no stranger to adapting to market demand (his store has been in the family for more than fifty years), but he told me that the current tourist market is capricious and unreliable. Prior to the 1967 War, he said, tourists in the Old City came also from the Arab world. The souq back then catered to such tourists, and had more restaurants and cafes. Today’s tourists are different; they come largely from the West, he says, with hardly any arriving from the Arab world. Furthermore, they come in increasing numbers from Asia and Eastern Europe. These tourists fear violence in the Middle East, and the slightest tension, even as far away as Iraq or Yemen, provokes a decline in the number of visitors. Worse, these new tourists don’t shop in the Old City. The tour guides-- Israeli, Palestinian, and international alike-- typically have commission arrangements with souvenirs shops (often ones owned by non-Palestinians), and convince the tourists that they will be cheated if they shop anywhere else. Tariq estimated that 95 percent of tourists passing through the Old City never purchase anything there.

Changing Wares for a Changing Market

As a result of the economic downturn and these major shifts in their customer base, the souq’s vendors have been increasingly forced to shift their offerings to match demand. This typically leads to an offering of a wide range of mass-appeal, low-quality items-- mostly cheap items aimed at wary tourists. Tariq offered an anecdotal illustration: the advent of airline regulations on the weight of passengers’ luggage has caused tourists to buy lighter (and therefore typically cheaper) products, causing shopkeepers like him to stop selling many heavier items, like silver or gold ornaments. In light of this situation, the conflicting merchandising choices make sense. Vendors are simply selling what the (now very limited and volatile) market demands.

Yet business choices in the souq aren’t simply a matter of economic efficacy; personal ideology also plays a large role. Many of the souq’s merchants are simply open-minded. They’re entirely willing to sell an ideologically varied set of items, and equally willing to sell to or work with someone of a different ideological or national background. One Palestinian grocery store owner said he sold “anything” to “whoever comes to buy”. When I asked him if he would work with an Israeli, he said no, before going on to explain that it was simply because he didn’t need investors or employees, not because he was opposed to the concept. This proved a very common response, as most owners said they would have no problem investing or working with someone from the other side of the aisle. Some even explained that they sought it out; Abdullah told me about his plans to convert his store into a coffee shop, and how he wanted an Israeli consultant to help him understand the best way to approach it.

Even more common than the desire to work with someone from the other side was the desire for new customers. I was told repeatedly that storeowners would be thrilled if people from the other side shopped at their venue. An employee at an Israeli food kiosk near Damascus Gate even told me that the owner of the place was actively attempting to attract more Palestinian customers. Nasir, a young man whose father owns six upscale souvenir shops in and around the Old City, concisely summed up the apparently prevailing attitude among the shopkeepers, telling me that nationality and politics were non-issues, provided there was mutual respect between vendor and client, employer and employee, or partner and partner. “It’s just about respect and business,” he said, “no matter who you are.”

“Together they can make magic”

Critically, there seemed to be a shared perception among all the vendors that what’s good for peace is good for business, and what’s good for business is good for peace. Almost every single person I spoke to articulated a desire to see the Old City under joint or international control. Leila and Yusuf, Palestinian Christians working in a high-end souvenir shop aimed at drawing Jews into the Christian fold, told me that they thought international control would amplify freedom of worship, access to religious-historical sites, and economic opportunity for the Old City’s residents and vendors. Many shop-owners, moreover, expressed hope that improved economic interactions between regular Israelis and Palestinians-- rather than governments or big corporations-- would be a step in the direction of peace and economic prosperity. As Abdullah said about the possibility for cooperation, “Israelis and Palestinians-- together, they can make magic.” 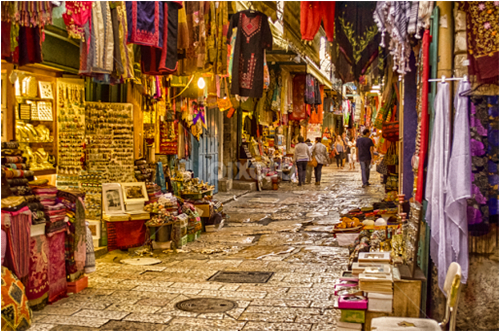 “Israelis and Palestinians – together they can make magic” says Abdullah

Despite the political and economic challenges facing the Old City, the attitudes of its merchants and the atmosphere of its market are cause for optimism. It is clear that their business practices stem not only from a keen sales sense, but also from a genuine openness. There is much work to be done to rectify the difficulties facing its merchants, and many of it can only come with peace. There must be a regulation of the tourist market and an end to unfair practices among those involved. Moreover, the market must be reinvigorated by permitting and encouraging local residents, both Israeli and Palestinian, to shop there. In the meantime, however, the pragmatism and open-mindedness of the souq’s businesspeople offers hope and real potential for advancement.