I made my way north from Jerusalem for a tour conducted by Walls2Windows, a group out of Tel Aviv working to offer internationals a different perspective on the Occupation by taking them directly to the areas most affected by the Occupation and its violence. This tour went to the city of Nablus and the neighboring Balata Refugee Camp, the largest refugee camp in Palestine. Most of the participants were students in Tel Aviv with a few coming from Jerusalem. My roommate and I were the only ones who are living in an occupied neighborhood (Shuafat) during our stay, so understandably many of these internationals were unaware of the destruction caused by the occupation of Palestine.

Historians regard Nablus as the third oldest city in the world. Although there is some debate, Jericho (also in the West Bank) is seen as the oldest, Damascus the second, and Nablus as the third. We visited the remains of the city known as “Tell Balata”. The archaeological park is run down and seems to be poorly funded. This fits in with the larger scheme of erasing Palestine’s place in the context of world history. This civilization was here long before any monotheistic religions had been practiced. Some western scholars still fail to recognize the importance of the 10,000-year-old remains located in Nablus.

The Balata refugee camp is not what you would picture when you imagine a refugee camp. Having existed since 1950, the camp is a collection of buildings housing over 30,000 Palestinians who were expelled or fled from their hometowns during the 1948 war. The UN first built a temporary camp, expecting the Palestinians to be allowed the legally granted right of return to their hometowns by UNGA Resolution 194, but instead the camp turned into its own town bordering Nablus, waiting for their return promised by international law. The camp is a lively place with children running around. The kids seem to only know one English word when they see our large group of internationals, “Money”. “Money, money, money,” they repeat over and over. Most of these children live in poverty and unlike their counterparts in the larger cities of the region they also rarely get the chance to see people from other countries. We attracted quite a large group of children following along, some asking for money, others simply intrigued by the group of foreigners wandering the thin alleyways of the camp. We walked through the market street of the camp and ate falafel, and the participants from Tel Aviv were in awe at the price of four falafels for a single shekel! 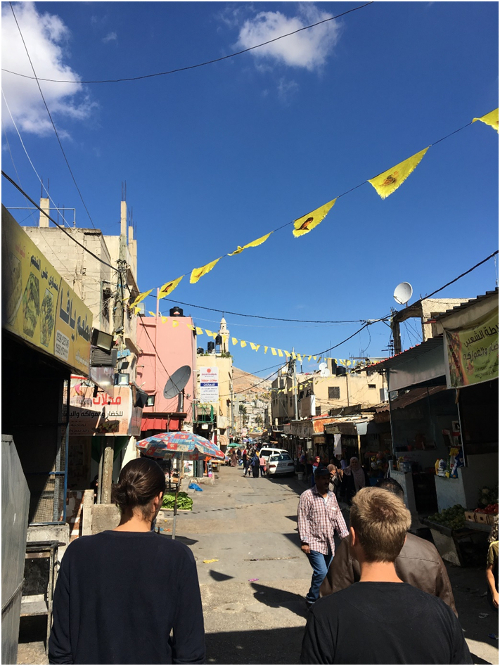 Our guide was a Palestinian man from Nablus who now works out of Tel Aviv. His stories about growing up in Nablus were harrowing and enlightening. One stop of the tour was in an old Ottoman-era house located in the Old City of Nablus. We walked the narrow staircase up to the roof of the house where we were greeted by a wonderful view of the city of Nablus, situated in a valley between two mountains, both of which house Israeli military bases ominously staring down at the Nabulsi people. While on the roof our guide told us the story of the siege of Nablus that took place in 2002, when our guide was only 13 years old. The siege was part of the wider context of the Second Intifada, a period of a few years beginning in 2000 where a grassroots movement of resistance developed among Palestinians to fight the suffocating circumstances of the occupation and the lack of progress toward a resolution of the conflict. During this time, the northern West Bank cities of Nablus and Jenin were hotbeds of Palestinian resistance and organization, and consequently received the most violent consequences from the Israeli military.

Our guide recalled to us how his family was not allowed to leave their home for 18 days. Anyone who walked out into the street was immediately shot dead, as he showcased to us when he pointed out a specific location where three Palestinians were murdered by an Israeli sniper. The siege took the lives of more than 100 Palestinians and lasted more than 20 days. Our guide told us how when the siege was lifted his father took him to walk through the Old City to make sure their relatives were still alive. He recalled walking over the debris of some of the oldest buildings in Nablus, bombed by Israeli fighter jets, and the overwhelming smell of death coming from the decaying corpses lying underneath the rubble. Since the siege and the violence of the early 2000s, Nablus, a once thriving tourist destination finds its old city and main market street relatively empty. 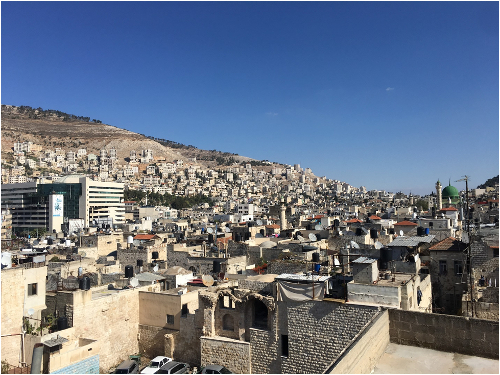 Despite the violent past of Nablus and the lack of tourism since the Second Intifada, the city still maintains its cultural roots. We visited an old soap factory where the same family has manufactured world-famous soaps for eight generations. We ate delicious Knafeh, the best Palestinian dessert in the city where it originated. We enjoyed a delicious pita bread lunch in an old café constructed in an Ottoman era building. We ended our tour with coffee and tea in a bar/café where all the Palestinian leaders of the Second Intifada would meet up to discuss the resistance against the Occupation. All those men are no longer with us, Freedom Fighters who made the ultimate sacrifice to defend the right of Palestine to exist. The tour ended, and we hopped on a service taxi back to the Qalandiya Checkpoint, another reminder of the omnipresence of the Occupation. 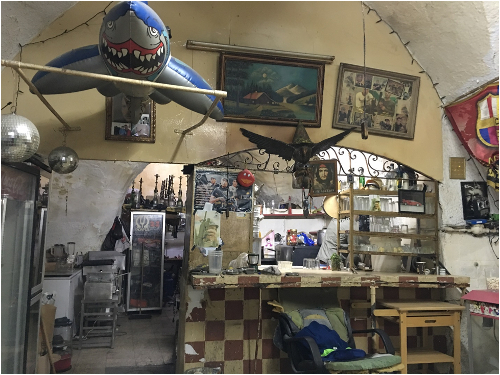 Bar where many of the resistance leaders drank coffee and discussed strategy. (Photo by Andrew Hebert)