The Kalimat- Palestinian Literature Festival began on Saturday night, November 3rd in Jerusalem in front of a full crowd at the Dar el Tifl School, a place Susan Abulhawa said, “saved my life”. Abulhawa was also the first speaker of the night, but the chair behind her name tag was empty. This is because Abulhawa, a Palestinian-American writer, was detained for more than 30 hours in Ben Gurion Airport and then deported back to the United States the night before she was supposed to lead the discussion. Even after her detainment and long journey back to the US, Israeli authorities failed to prevent Abulhawa from voicing her narrative as she joined the festival via Facetime. The speech she gave (link below) was a powerful rejection of Zionism and an assertation of her right to visit her homeland. Abulhawa challenged her Israeli captors saying, “I am a daughter of this land and nothing will change that; that my own direct history is steeped in the land and there’s no way they can extricate it; that as much as they invoke Zionist mythological fairy tales, they can never claim such personal familial lineage, much as they wish they could.” Having been detained once before in 2015, this time Abulhawa was prepared. She snuck in a backup cell phone tucked beneath her clothes which she used to take pictures of her captivity, and she also brought a pencil into the cell which she used to write, “Free Palestine”, and “Israel is an Apartheid State”. Abulhawa finished up her opening speech with a moving criticism of the Israeli state proclaiming, “Israel is spiritually, emotionally, and culturally small despite the large guns they point at us – or perhaps precisely because of them. It is to their own detriment that they cannot accept our presence in our homeland, because our humanity remains intact and our art is beautiful and life-affirming, and we aren’t going anywhere but home.” 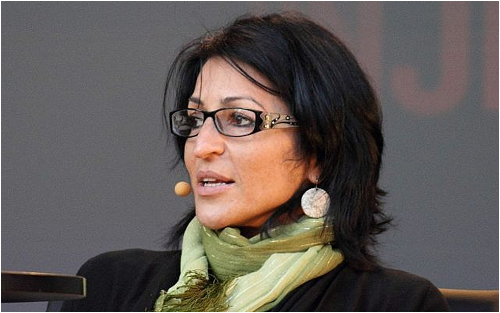 Abulhawa was not the only festival participant affected by the Israeli occupation. Fida Jiryis, a Palestinian journalist and novelist who was born a refugee in Lebanon and has since returned to Palestine via Cyprus and Canada, was held up at Qalandiya checkpoint for two and a half hours before she arrived late to the festival. Once again, like Abulhawa, the obstacles of the occupation could not prevent Jiryis from speaking her piece. She shared her story of being one of the only Palestinian refugees to return to her original hometown in the Galilee, a place where, surrounded by newcomer Israelis, she felt completely out of place. She had lost her mother to a car bomb in Lebanon when she was only 10 years old and feeling alone in the Israeli Galilee, she decided to move to Canada with no intention of coming back. But she could not leave Palestine, or rather, Palestine could not leave her. And this message is what Jiryis conveys in her collections of short stories she has written since her return to Ramallah in 1999. She says her hope is to bring the Palestinian narrative to the rest of the world and convey the feelings of what it’s like to live in an open-air prison on your own land. 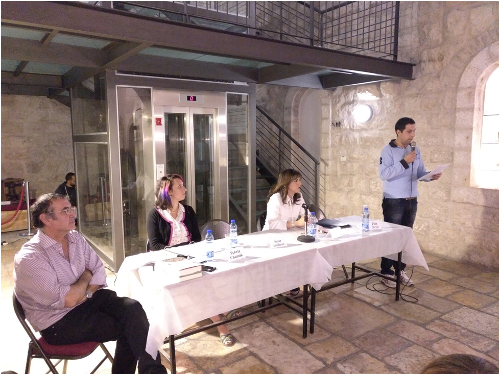 The only international speaker at the event was Sylvia Chutnik, a Polish feminist writer who focuses her work on “memory studies”, or how people remember their historical past. She bases her work in Warsaw, Poland and looks at how everyday people deal with the “museum of dreams, desires and wishes” that form our collective understanding of the past. She says we are addicted to a lens, a certain perspective of the past that limits our view but also provides knowledge about our own biases and sentiments to the stories we are told.

"We have our own fish to fry"

Nasab Hussein, a Palestinian writer and poet born in the Galilee conducted most of her talk in Arabic, and shared passages from her own works with the audience. She shared one of her poems which had been translated into English titled, “Apology to the Peoples of the World”. Her presentation in Arabic was very emotional and energetic while the man who read the English version took a more somber tone while reading the translation. The poem itself was a beautiful apology from the Palestinian people for their lack of action regarding climate change. Hussein confesses her guilt for watching the environment collapse but repeatedly says, “Forgive me I have my own fish to fry.” Her “fish” is of course the overwhelming struggle of living under occupation in the West Bank which makes it hard for Palestinian people to focus on other things like the destruction of our climate. “Towards my young children;/ I apologize for the missiles that/ Rambled in my home/ Decimating it to the ground”, she writes, acknowledging the destruction of both her land and her world. Her poem highlights the struggles of living under occupation, “I am still stuck at checkpoints, / Trapped, / Dreaming for an embrace from a homeland/ With no alienation, no guns…”

A much needed Comprehensive History of Palestine

The talk was moderated and concluded by renowned Palestinian historian Nur Masalha who recently finished his enormous history of Palestine titled, Palestine: A Four Thousand Year History. Masalha says this book is “by us for us”, us meaning Palestinians, who have been spoken for by all kinds of people for too long. Masalha hopes his complete history will be of use for Palestinian school children who have never been given a comprehensive and historically accurate historical account of their homeland. Masalha made sure to note that throughout history Palestine has been referenced as a definitive political region, often with its own currency and bureaucracy while the term “Israel” only referred to a tribe of people within the territory of Palestine. The book begins four thousand years ago when the name Palestine was first referenced in the Amarna letters of correspondence between the Great Powers of the Near East. Another quote from Abulhawa sums up what Masalha was trying to represent in his history and throughout this event of literature and cultural expression: “It occurred to me, too, that all Palestinians – regardless of our conditions, ideologies, or the places of our imprisonment or exile – are forever bound together in a common history that begins with us and travels to the ancient past to one place on earth, like the many leaves and branches of a tree that lead to one trunk.”

The Literature Festival is a six night event with stops in Jerusalem, Nablus, Ramallah, Bethlehem, Haifa and Jaffa and features Palestinian writers as well as international contributors.