On December 9th, the Israel/Palestine Center for Research and Information (IPCRI) hosted a roundtable event focusing on the role of tourism in the Israeli-Palestinian peace process. Hosted at the American Colony Hotel, the event brought together some two dozen participants from various backgrounds related to the tourism industry. The evening’s hosts, IPCRI co-directors Liel Maghen and Nivine Sandouka, explained that their goal was to begin a conversation about the tourism industry’s potential role in bringing both sides closer to peace, and that they hoped those in attendance would take the opportunity to connect with one another in ways that might further both their own business interest and the broader goals of peace.

Maghen and Sandouka began the conversation by highlighting some statistics about tourism in Israel and Palestine. More than 3.6 million tourists visit Israel every year, they said. In any given year, roughly three-quarters of foreign tourists to Israel visit Jerusalem itself.1 This tourism plays a major role in boosting both the Israeli and Palestinian economies; a decade ago it was worth 2 to 3 billion USD in income every year.2 This year, tourists spent over 20 billion NIS in the country.3 According to IPCRI’s research, tourism in Israel and Palestine is now stronger than ever, positioning it to have a major impact on the Israeli and Palestinian societies as a whole. 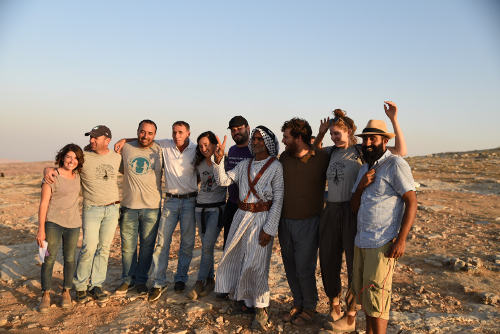 Illustrative photo of a peace tourism group in the OPT

As the introduction gave way to an open discussion, a few of the participants pointed out a key distinction in tourism in both Israel and Palestine: internal versus external. As Fred Schlomka (Green Olive Tours) explained, foreign tourists are only a part of the tourist industry in the region. There is an enormous demand from both Palestinians and Israelis to tour “the other side”. Whether they are Palestinians going to visit Haifa or the beaches at Tel Aviv, or Israelis exploring Ramallah and Bethlehem, an increasing segment of both groups is willing to pay for what is effectively a very traditional tourist experience on the side of the Green Line opposite their own-- exploring, hanging out, and generally having a good time. Lastly, added Yamen Elabed (also from Green Olive Tours), there is a real possibility to attract new tourist attention from the wider Arab world, something which has not been an option since the occupation of the West Bank and the Old City during the 1967 war.

Humanizing the Other or Normalizing the Occupation?

The group eventually moved to a discussion of the impact of the tourist industry on the peace process in Israel and Palestine. There exists, of course, the obvious potential to sway both governments toward peace by incentivizing a stable, violence-free climate. Sandouka also explained that IPCRI’s research on European parallels to Israeli/Palestinian tourism suggests that the industry can positively affect people’s attitudes toward peace and bring both sides closer to the table. However, some dispute arose over the industry’s potential to shift the day-to-day reality of Israeli-Palestinian interaction. While some participants argued that local tourism (Palestinians visiting Israel and Israelis visiting Palestine) had the potential to both humanize the other and allow the populations to de-stress a little, others contended that such interaction amounted to normalization of the Occupation and would further entrench the status quo, with Elabed insisting that nothing short of ending the Occupation could accomplish such changes.

The beginning of a broader conversation

Regardless of the impact of tourism on the political climate, the group agreed that the governments of both Israel and Palestine are, oddly, hampering the growth of the industry. This manifests in a few ways, including the denial of entry visas to Palestinians wishing to visit Israel, restrictions on the number of permits issued to tour guides by the Palestinian governments, and all sorts of other short-sighted political maneuvering. Yet the consensus among the discussion’s participants was that the development of the tourism industry, expanding as rapidly as it currently is, will be vital to the futures of both Israel and an independent Palestine. Everyone present agreed that an infrastructure to accommodate, support, and encourage the growth of the industry is essential not only to the industry itself, but to the future economic integrity of both sides.

As the evening came to a close, many points had been brought up, meriting further discussion: the role of the tour guide in bringing people together, tour groups balancing political agendas with a sense of fairness, explaining regional terminology to tourists in a non-polemic way, and so forth. Thankfully, this event is the first of many; IPCRI plans to continue doing research in the field and it hopes to produce a holistic report on it in the coming months. Important questions were raised during the course of the conversation, and important contacts were made between members of what is clearly a critical industry. It was, in short, the beginning of a broader conversation.