“You can’t be a fan of mine and not want peace in the world,” declared Madonna to a crowd of some 30,000 enthusiastic fans in Tel Aviv last night. The singer and general phenomenon chose to open her current world tour in Israel, at the Ramat Gan National Soccer stadium on the outskirts of Tel Aviv, because, as she explained in a mid-concert speech, “the conflict in the Middle East has been going on for generations, for thousands of years,” and “if there is peace in the Middle East, there can be peace in the whole world.”

She chose to call the event “Concert for Peace,” and gave out 600 free tickets to the 100 civil society organizations of the Palestinian-Israeli Peace NGO Forum, which comprises 60 Israeli and 40 Palestinian peace, human rights, interfaith and democracy organizations. Each ticket had a list price of NIS 1,600. A special gallery on the side of the stage was built to host the peace activists, with a big sign hanging over the railing, facing the general audience: “Working for Peace – the Peace Organizations’ Forum.” About half of the activists in the section were Israeli; the other half Palestinian. Also present were the two co-chairs of the Peace NGO Forum, the Israeli Dr. Ron Pundak, one of the architects of the Oslo Accords, and Palestinian journalist and veteran activist Saman Khoury, a co-architect of the Geneva Accord.

Respect yourself, express yourself

“Respect yourself,” she sang, “express yourself, don’t repress yourself.” It’s “time to live dangerously,” she said, out on her own at the edge of the ramp, in the middle of the audience. Then came renditions of “Erotica,” “Like a virgin,” and of course, the climactic frenzy of “Like a prayer,” with everyone swaying on the steps and in the isles.

I asked one Palestinian if he would have bought a ticket to the concert. He wasn’t sure, but he said that “after all, this is the soundtrack of our youth.”

A younger international intern working with the peace movement said, “I heard that she was more original 20 years ago.”

But no matter what generation you belonged to, you couldn’t help but be overwhelmed by the extraordinary spectacle of Madonna’s two hours of constant energy, and the multicultural, pluralistic nature of her show, replete with video images of war and violence, floating drummers and psychedelic imagery.

“We are all working so hard to overcome the obstacles facing the path to Israeli-Palestinian peace,” said Lior Finkel, coordinator of the Israeli side of the Peace NGO Forum, “and what Madonna gave us was an acknowledgement of our efforts, and a moment of much-needed celebration and relief.”

We all bleed the same color

Madonna herself, in her powerful mid-concert talk, said: If we can all rise above our egos and our titles and names of our countries and our religions, and treat everyone around us with dignity and respect, then we are on the road to peace. She emphasized that it didn’t matter whether one was Jewish, Muslim, Christian, Buddhist or Atheist, straight or gay, and noted that her talented ensemble contained people from all backgrounds, walking many different paths. Echoing Shakespeare’s Shylock, she declared that “we all bleed the same color.”

With her “Concert for Peace,” Madonna joined the many international artists who are saying that boycotts aren’t the way to promote a message on conflict-resolution and reconciliation. Leonard Cohen preceded her when he gave the entire proceeds of his 2009 concert in the same venue to establish a Fund for Reconciliation, Tolerance and Peace, to promote Israeli and Palestinian co-existence. And Pink Floyd’s Roger Waters chose to perform “The Wall” at the joint Palestinian-Israeli community of Neve Shalom/Wahat El-Salam, declaring that he would perform “The Wall” once again when the separation barrier between Israelis and Palestinians came down.

However, it should be clear that it will be impossible to find any major international artist or writer who will be ready to come to Israel today to support a continuation of the occupation, or a do-nothing, status quo-based Israeli policy. 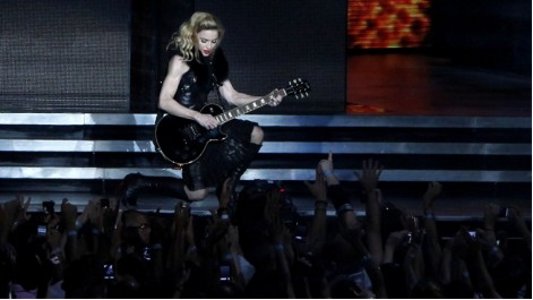 Unlike the Leonard Cohen or Bob Dylan concerts, where it can be assumed that most of the audience was in the actively pro-peace camp, the overwhelming majority in the mostly young crowd last night were presumably not political; rather simply a broad cross-section of young Israelis, from across the right-left spectrum. Reaching out to them with a message of peace was particularly meaningful.

Engaged artists for peace is the way to go.