There was a lot of energy in the air in Tel Aviv last night, as over 10,000 demonstrators gathered at Habima Square, next to Rothschild Boulevard, where it all began in the summer of 2011. Smaller demonstrations also took place in Haifa and Jerusalem. The march headed out via Ibn Gvirol Street at 9 p.m, and turned left at Shaul Hamelech, towards its destination point – the square in front of the Tel Aviv Museum of Art.

People were equipped with pots and pans, banging away to accompany the rhythmic shouts of “The people demand social justice.” Blue and white Israeli flags mingled with red flags of the revolution and green flags of the Meretz Party. Signs demanded a return of the welfare state, “We are the 99%!” echoing the slogan of the Occupy movement around the world, and a number of demonstrators even carried an iconic tent, recalling the tent cities that sprouted like mushrooms in Tel Aviv and throughout the country last year. 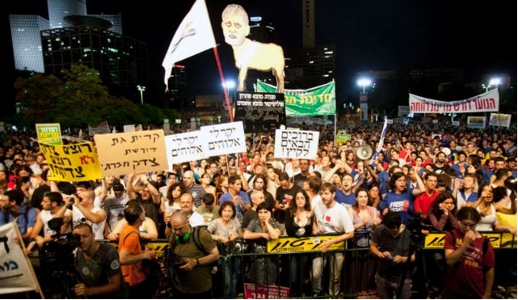 Social Justice for all Human Beings

Most of the demonstrators were young, though I also saw 90 year old veteran impresario Fiska (Shmuel Furstenberg) in a wheel chair driven by his son, proudly carrying a sign calling for “Social Justice for all Human Beings”, replete with a smiley icon. And there was veteran activist Ofer Avni, who was captured in the famous 1982 photo at the demonstration against then Defense Minister Ariel Sharon in Jerusalem, marching alongside Emil Grunzweig, a few minutes before the grenade was thrown by a right-wing Jewish militant Yona Avrushmi that killed him.

We have changed the public discourse

Shai, an articulate teacher from Jerusalem, was one of the first speakers on the stage. She expressed a sense of doubt that many people feel about the ability to revive the protest movement, but declared that “we will do it. We teachers, and our students, as a result of last summer’s protest movement, have changed the discourse. And we will not allow leaders to divert attention from our demands with all sorts of dangers, whether it’s Iran, Sudan (the Sudanese immigrants), or the Palestinians. We and our students will continue to insist on a change of priorities, on genuine social justice in Israeli society.”

Some of speakers sent barbs to the leadership. “Has anyone seen (Kadima leader) Shaul Mofaz in the audience, who claimed after he was elected that he ‘would lead the protest movement’?! And Ehud Barak, who as Mofaz was elected as head of the Labor Party to be an opposition to the government and its policies, and then stole the seats to create the Atzmaut Party and remain in government? And what about Prime Minister Netanyahu, who called for elections and then beat a hasty retreat?”

There was a tension between the messages coming from the stage. Some repeated the slogans of last summer, “We are not left or right, but are demanding social justice for all.” However others, like Beersheva Mizrachi social activist Yehuda Aloush recalled the first demonstrations in Haifa’s Wadi Salib in the 50s, and the Jerusalem Black Panthers in the 70s, and said that the left should unite, and be inspired by the victory of the Socialist Francois Hollande in France.

We have to go beyond protest, to organization

Two Haifa activists, one Jewish and one Arab, stood side by side, and issued a powerful call for mobilization and change. The Jewish activist said that “we have to go beyond protest, to organization”. He called on people to become involved in national Social Guard groups, which are monitoring the activists of the Knesset committees, and the local Social Guard groups that monitor municipal activity. He also called on people to join consumer’s rights groups, and to become active politically. “We will not allow people to divide the protest movement from the people who live in the disadvantaged neighborhoods by attempts to foment racism and fear” he declared. His Arab colleague declared that “we will build a new society, for all Israelis, and we will not allow anyone to create divisions between Jews and Arabs, Ashkenazim and Sephardim, men and women.” He even quoted excerpts from a poem by Israeli-born Palestinian national poet Mahmoud Darwish.

A dynamic young Russian activist said that “the messages of the social protest movement are extremely relevant to the Russian immigrants, who don’t have parents who can help them pay for an apartment, and who after 20 years of cleaning the streets and guarding buildings only get a 900 shekel pension to live on. Netanyahu and Lieberman do not provide us with answers” she declared.

The Occupation, an invisible concept no longer

And unlike last summer, the Occupation was not an invisible concept, the elephant in the room that no one mentioned. One man carried a sign saying “The Occupation prevents me from having an apartment”. And two speakers on the stage said that the money being poured into the settlements should be channeled towards social justice needs.

With her fiery red hair, social protest leader Stav Shafir personified the link between the face of last summer’s mass movement, and the new revival. She declared confidently that “we will not go away, and we will win!”

And for those who say that the renewed protest movement does not represent the Israeli people, well said the moderator, here is the Izabo band, which officially represented Israel in the recent Eurovision song contest! Izabo – Time – YouTube Although others may have been present, the only MKs I saw in the crowd were Zahava Galon and Nitzan Horowitz of Meretz, and Dov Henin of Hadash. However there were also demonstrators holding signs calling for people to register for the Likud Party, so that they could have an impact on the political process from within.

The organizers are gearing towards a huge mass demonstration on Saturday July 14th, the anniversary of the setting up of the first protest tent on Rothschild Boulevard in the summer of 2011.

It’s hard to predict the effectiveness and potential impact of the renewed social protest movement, but there is clearly a combination of ongoing grievances combined with organizational energy which cannot be ignored.

And it’s hard not to reflect on the idea that one of the primary reasons why Prime Minister Netanyahu reversed his position on elections and opted for the massive “national unity” coalition (national paralysis coalition?), with 94 members of Knesset and a record-breaking number of ministers, was his fear of facing the momentum created by the renewed social protest movement and its potential impact on the political sphere if the elections were to be held in the September, 2012.

This original appeared in The Times of Israel under the title “We’re Back! – Return of the Social Protest” blogs.timesofisrael.com/were-back-return-of-the-social-protest/