When I left the demonstration marking the first anniversary of the Israeli social protest movement, I was planning to call this piece “July 14th – One Year Later.” When I got home, I learned that Moshe Silman, a desperate 57 year old man had set himself on fire. The note he left said "The state of Israel stole from me and robbed me. It left me helpless…” and he blamed "the state of Israel, Prime Minister Benjamin Netanyahu and Finance Minister Yuval Steinitz, for the humiliation that weakened citizens go through every day, taking from the poor and giving to the rich."

Apparently I had passed the spot where he set himself ablaze, near the London Mini Stores and the Tzavta Cultural Club on the corner of Kaplan and Ibn Gvirol streets just 10 minutes earlier. It was from the windows of the hi-rise building above the corner that David Perlov filmed his magnificent award-winning series of documentaries on Israeli life “The Perlov Diaries”. If Perlov were still alive, he could have added another dramatic episode to the series.

My first thought upon hearing about Silman’s act was to recall the Vietnamese monks who set themselves on fire back in the early 60s. Then I realized that he may have been consciously or unconsciously inspired by an act much closer to home – the act of Mohamed Bouazizi, the Tunisian who set himself on fire on December 17th, 2010, which ignited the Tunisian revolution and the broader Arab Spring.

In a sense, Silman’s act was one of the possible natural outcomes of the format chosen for the July 14th 2012 demonstration.

One year later, the social protest movement has three main trends: the one led by Dafni Leef and her colleagues, who organized the protest in the center of Tel Aviv, advocates general protest in the streets, a coming together of all sectors and segments to express their grievances and advocate a general transformation of both the discourse and the structure of Israel society; the one led by Stav Tzafir and her colleagues, together with the protest advisory committees chaired by professors Yossi Yonah and Avia Spivak, who organized a second demonstration along the Tel Aviv beachfront, who advocate a more focused, politically oriented protest movement, symbolized by the new Socio-Economic Covenant for Israeli society that they introduced at the demonstration two weeks ago; and the “Share the burdens equally” track advocated by the Boaz Nol and his colleagues from the “Suckers Encampment”.

What struck me about the main demonstration which convened at Habima Square, next to the location of the first tent set up by Dafni Leef on Rothschild Boulevard on July 14th, 2011, was the fact that most of the signs carried by the demonstrators were home-made. Every possible cause was being advocated. Just a sampling: Let Us Be The Change, Revolution of Love, Humans Should be Human to Humans, There’s No Peace, No Social Welfare, Down with the Government, We Have to Save Public Psychology, Revolution is an Act of Self-Defense, I’m Autistic and I’m Proud, We Want Affordable Housing, July 14th, 2012 - Israel: The Downfall of Capital/Government is Continuing!, Eyes Which Have Been Opened Will Not Close!, A Nation of Sheep is Being led by Leaders who are Wolves and Pigs!, 1948 (crossed out): 2012, A State is Being Founded!, Bibi Go Home!, Welfare State Now!, Down with the Occupation!, Solidarity with the Spanish Miners, The Nuclear Program Is Costing Us 7 Billion Shekels a Year!, Close your TV Sets!, We, the Majority, Have Returned to the Streets (rhymes in Hebrew) and many more. Someone with a sense of humor even created a sign which said “Everything’s Okay – You Can All Go Home”. 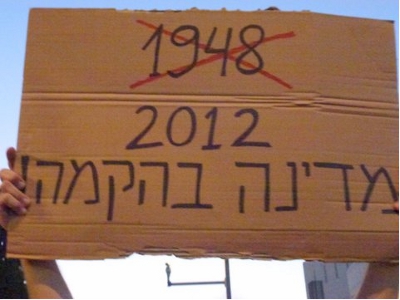 There were some characters too – a beautiful “angel” in pink (take my picture!), a guy all in white with what looked like a series of white fans to cool everyone, even someone representing La Familia, the racist fans of Beitar Jerusalem, though it wasn’t clear why he was there.

Tens of thousands of demonstrators left Habima Square, marched down Ibn Gvirol Street, then turned into Kaplan Street and headed towards the imposing Azrieli Towers overlooking the train station and the road to Jerusalem. I wondered why that location was chosen, and then I noticed that we were surrounded by three main artifacts – The three Azrieli Towers which represent corporate power, the Soviet-like Ministry of Interior Building across the way representing government, and the towers of the Defense Ministry and military headquarters in the Kirya, the Israeli Pentagon. The demonstrators appeared to be unconsciously confronting the dangers of the military-industrial complex that President Eisenhower famously warned about in his farewell address. 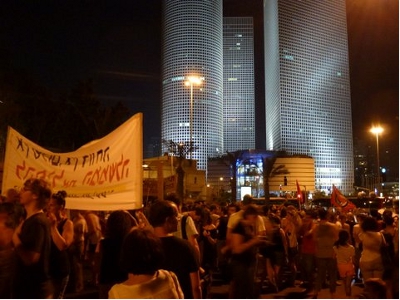 After having reached this destination, the demonstrators turned around and started heading back to Ibn Gvirol Street. Five makeshift platforms built along the route, all equipped with mikes and a moderator now served as an urban Hyde Park with demonstrators taking turns to express their feelings. At one of the platforms I heard three people speak: a young woman took the mike and said – “I just happened by Rothschild Boulevard last year and became involved. The same thing happened now. And I want you to know that the first thing I did today was to go up to the policemen and say that ‘we are not your enemies, there will be no violence - we are all in this together’”. The next fellow in a green shirt who came from Jerusalem said “I work my butt off trying to make ends meet. And it’s simply not possible. I don’t have any dreams about becoming wealthy – just want a system where people can earn a living with honor.” A third, very cynical guy said that “they are all stealing from us, the corrupt government officials, so my recommendation is to steal from them. Yes, steal what ever you can. There’s no other way” prompting the moderator to say that he was only expressing his own, personal opinion.

Soon afterwards, Moshe Silman had his say, with matches and kerosene.

We have not disappeared!

So what does it all mean?

I ran into Michael Roeh, former Deputy Mayor of Tel Aviv back in the year 2000, and said to him “I hope this can all be channeled into constructive change.” His response was: “Let a thousand flowers bloom.”

The parties were there too. Meretz, Labor, Hadash and some of the smaller more radical groups, even the “New Likud” was there, all trying to sign up new members.

Also demonstrators carrying the slogan “Register for a party and vote!” Clearly, all of this energy will have to find political channels of expression.

As one sign said – “We have not disappeared!” And one wonders what the long-term impact of Moshe Silman’s fiery act will be.