As we near the April 29th deadline for Israeli-Palestinian negotiations set by U.S. Secretary of State John Kerry, some people are afraid of using the word "peace", thinking its passé, utopian or simply unattainable, like the other side of the moon.

On Friday morning, March 28, hundreds of activists streamed towards the Reading parking lot on the banks of the Yarkon River in Tel Aviv. Wearing white peace ti- shirts with the word Peace and an olive branch on the front, they were joined by the activists from another peace organization One Million Hands for an Agreement, who distributed colorful hands on a stick, with the slogan "Every hand is a vote for peace." So far 150,163 people have given a hand on their website and Facebook page.

Dozens of Palestinians from the West Bank at the march

The unique aspect of this march was the participation of dozens of Palestinians from the West Bank and East Jerusalem, including families with children. Their presence was a powerful declaration that there is a Palestinian partner for peace. The last time Palestinians planned to join their Israeli colleagues, they were denied a permit to enter Israel by Defense Minister Ya'alon at the last moment, who apparently claimed to one of the organizers "what difference can it make". Also present were a number of diplomats from the American Embassy, and it wasn't clear if they were there out of identification with the march (probably yes) or testing the waters of public opinion (also probably yes). 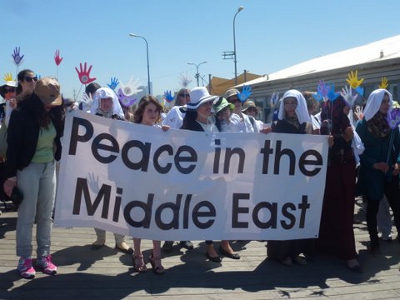 All the marchers crossed the bridge over the Yarkon River and gathered together at a mini-amphitheater to hear to keynote speeches by MK Hilik Bar and PLO Central Committee member Muhammed Madani. Bar, who is co-chair of the Knesset's Lobby for the Promotion of a Solution for the Israeli-Arab Conflict together with MK Meir Sheetrit, said that "70 members of the Knesset ready to raise their hands for a two-state solution," while Madani, who is chair of the Palestinian Committee to Interact with the Israeli Society and spoke in Arabic translated into Hebrew, declared that "we are here as partners, ready to make peace with you based upon a two-state solution.

"MK Hilik Bar speaking, with Muhammed Madani to his right

One of the driving forces behind Leading Leaders for Peace is the impressive Ali Abu Awad, who previously served as the Palestinian spokesperson for the Bereaved Parents Circle. Speaking in both Hebrew and Arabic, he moderated the formal part of the event.

Support from the cafes and bystanders

Then, with women and children at the head, and carrying a big sign saying Peace in the Middle East, everyone marched along the boardwalk of the Tel Aviv Port.

What was particularly striking about this aspect of the event was how welcoming all the crowds were in the beach side cafes – giving a thumbs up sign, clapping and asking for colorful hands of their own. As I said to former PA Minister Ashraf Ajrami, "this is Tel Aviv, the heart of support for Israeli-Palestinian peace. I doubt that we would get such a warm, welcoming reception in West Jerusalem."

Looking out towards the calm blue Mediterranean Sea on the warm spring day, one could momentarily forget the tension in the negotiating rooms and the government circles in Jerusalem, Ramallah and Washington, that is building up as the deadline approaches.

When we reconvened at the starting point, one of the Palestinian youth from the West Bank asked "where's the humus?" I said we'll have food when we have peace.

This originally appeared at The Times of Israel http://blogs.timesofisrael.com/leading-leaders-for-peace-in-tel-aviv/