For the first time since that that terrible November evening forever etched in the national memory, Yuval Rabin, the son of the assassinated Prime Minister spoke at the annual rally in Tel Aviv. I was there on November 4th 1995 at what was then still called Kings of Israel Square, and was heading down King George Street on my way home when Eitan Haber declared outside of Ichilov Hospital that “The government of Israel announces in dismay, in great sadness, and in deep sorrow, the death of prime minister and minister of defense Yitzhak Rabin, who was murdered by an assassin, tonight in Tel Aviv. May his memory be blessed.” And today, Haber writes in his column in Yediot Ahronot that “The Murderer Succeeded (Meanwhile)”.

There were many moving moments at the rally last night, beginning with the comment by MC leading Israeli actress Yael Abecassis that she was supposed to moderate the fateful 1995 rally against violence and for peace, but given the turbulent atmosphere and vitriolic attacks against Rabin at the time, had actually been afraid to come. This year she vowed to make up for that omission, saying that “today we all need the courage to stand up for our beliefs and to speak out.” 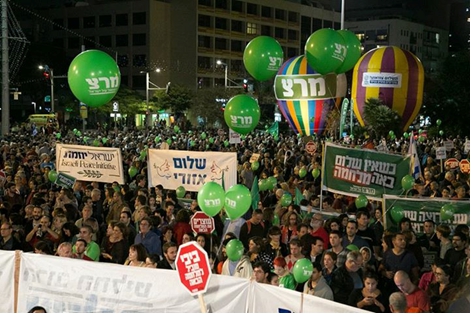 Returning to the Square to bring back hope

The advertisements said that “We are returning to the Square to bring back hope!” This year’s rally was organized by the Israeli Peace Initiative headed by Yuval Rabin and businessman Koby Huberman, together with Blue White Future, Women Making Peace, The 4th of November, EcoPeace Middle East and AJEEC – NISPED (The Arab-Jewish Center for Equality, Empowerment and Cooperation – Negev Institute for Strategies of Peace and Development).

It was definitely a forward-looking political rally, not just a memorial to the slain leader. One of the primary themes of many of the speakers is that Prime Minister Netanyahu always talks about threats and fears, Iran, ISIS, Hamas, etc., but he never inspires hope. When speakers called upon Netanyahu to take the initiative, the crowd responded with shouts of “Bibi go home!,” clearly not expecting anything new from the PM.

Peres: “Where is the Israeli peace initiative?”

The opening speaker, the ever-energetic 91 year young former President Shimon Peres declared that “managing the conflict is not a policy”. He said that we see where managing the conflict got us in Gaza this summer, and in Jerusalem right now. “Where is the Israeli peace initiative?” he asked, adding that “the State of Israel would be giving up on its future if it pursues the status quo and remains without peace.” Peres said that the Arab Peace Initiative (sometimes called the Saudi Initiative) launched at the Arab League Summit conference in 2002, could be a good basis for moving towards a regional arrangement, but progress on the Israeli-Palestinian track was a key to making a regional arrangement. He recalled the three Arab no’s of Khartoum in 1967 -no peace with Israel, no recognition of Israel, no negotiations with it – have been replaced by an Arab yes – yes to recognition and normal relations with Israel – after a two-state solution with the Palestinians is reached. He added that “Israel will not have permanent security without peace, it will not have a stable and prosperous economy without peace, and it will not have its international standing and special relationship with the United States without peace.” 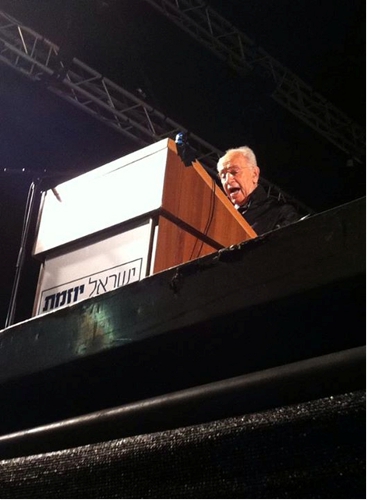 Peres: “No security or prosperity without peace”

The need for a new Israeli diplomatic initiative and a positive Israeli response to the Arab Peace Initiative (API) was a key theme of the evening, repeated by lawyer Gilad Sher of Blue White Future, and also by Yuval Rabin. Sher noted that Saudi Prince Turki Al Faisal had published an article in Haaretz in July, “The Only Way”, which said that the API “still provides a template for peace – a formula for a just and comprehensive solution to Israel’s conflict, not only with the Palestinians, but also with the Arab world…” Haim Jelin, Head of the Eshkol Regional Council and Yeruham Mayor Michael Bitton represented the southern residents who live near the Gaza border and suffered from rocket and mortar fire this summer at the rally. Both of them emphasized the importance of a diplomatic initiative to achieve peace and security for the residents of the south, and for all Israelis. Jelin also issued a call to Ismail Haniyeh, the Hamas political leader in Gaza, to use words rather than rockets to solve the problems of the Palestinians in Gaza.

Particularly moving and symbolic was the appearance of 19 women on the stage, representing the Women Making Peace initiative, including a Bedouin Arab woman from the Negev. Taking as their springboard the fact that the Israeli government had incorporated UN Resolution 1325 mandating the involvement of women in peace-making into law, they called on the Israeli government to launch a peace initiative and to involve women in the process.

Yuval Rabin: “I don’t have the strength to be silent”

Yuval Rabin was the final speaker of the evening, and he apparently inherited his father’s discomfort about public speaking. Yet his message was clear. Echoing Yael Abecassis’ opening comments, he said: “I don’t have the strength to keep silent given the leadership which has replaced action with excuses, and hope with a castrating campaign of fear and despair. Fanning the flames of fear is not policy, inaction is not an agenda, and personal political survival cannot come in place of confronting the genuine challenges.” Echoing Peres, he said that “true security can only be achieved by a reality of peace.” Rabin added that the Palestinians also deserve to live a normal and secure life, and he read out a message to the rally that was sent to him by Palestinian Authority President Mahmoud Abbas, in which he called on Israelis to make peace with the Palestinians, a step “that will be a death blow to all fundamentalist movements and will send from the Holy Land a universal message that religion should not be abused for political gain.” 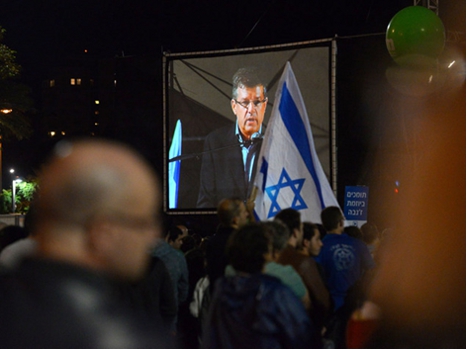 Yuval Rabin: “I don’t have the strength to keep silent”

And there was also music. Someone standing near me said – “what is this, have I come to a concert?” Well, also. Tislam reunited, and sang a rousing rendition of “Partzufa shel Medina” (Image of the State). Another reunited group, Machina, sang Makom Acher (Another Place). Also on board were the new folk sounding group Angelcy, who my son had just seen at the Indy Negev Festival, and there was Carolina, and representing the younger singers of the past few years, Avraham Tal. And of course Hadag Nachash, with lead singer Shaanan Streett greeting the audience 3 times with Shalom L’kulam, (meaning both hello to everyone, and peace to everyone), who sang together with the audience The Sticker Song, and Zman L’hitorer (Time to wake up).

When they finished, Abecassis asked Hadag Nachash to please stand quietly, something they find very hard to do. It was that moment that comes every year, the time when the moderator asks the entire audience to stand in silence for one minute, the moment when the three shots rang out that killed the Prime Minister. This is always followed by video images of that fateful rally in 1995, accompanied by the haunting voice of Arik Einstein who is no longer with us, singing the mournful song Shalom Chaver. And there is the image of the smiling then Tel Aviv Mayor Shlomo Lahat, who also passed away less than a month ago.

Hope for the future

To close the rally, Abecassis asked Avraham Tal to lead the audience in a singing of Hatikva, the national anthem. Hatikva, The Hope. It seems as if this is the only time every year that I find myself joining in on the singing of Hatikva. And maybe, just maybe, this year’s rally, and it’s message, is a symbol of a possibility of hope for the future.

As the rally breaks up, the sounds of the anthem of the Israeli peace movement, Shir Lashalom (Song for Peace), the last song that Rabin sang on that fateful night 19 years ago, are heard over the loud speaker system. Always followed by John Lennon, Imagine. 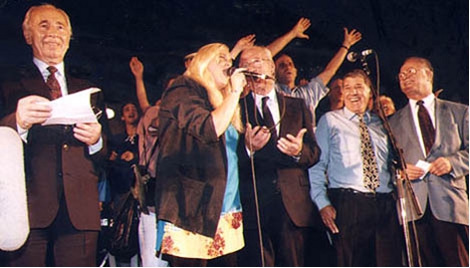 This article originally appeared in The Times of Israel:Remembering Rabin 19: Time for an Israeli Diplomatic Initiative | Hillel Schenker | The Blogs | The Times of Israel http://blogs.timesofisrael.com/remembering-rabin-19-time-for-an-israeli-diplomatic-initiative/#ixzz3Hzrlesje