Tuesday was a terrible day in Jerusalem. The vicious, tragic early morning terrorist attack against Orthodox Jews during the morning prayers at the Har Nof Synagogue in West Jerusalem set the stage for another very sad and deadly day in the spiral of violence that we have been experiencing in the so-called city of peace.

Although I live in Tel Aviv, I am one of the few Israeli Jews who regularly spends a few days a week in a Palestinian neighborhood in East Jerusalem, in the course of my work at the Palestine-Israel Journal, a rare and perhaps unique oasis of joint Israeli-Palestinian activity in these crazy times. Unlike the unwanted intrusion of a few thousand right-wing settlers among the 350,000 East Jerusalem Palestinians, I am known to all the felafel and "authentic Turkish" shawarma venders, the old lady at the neighborhood pharmacy worries about my health, and the two brothers who ran an olive wood gift shop for 40 years and were forced to vacate because they couldn't afford the rent are always happy to see me on the street. And sometimes I exchange nods with a veteran Palestinian National Council member during his daily walk. 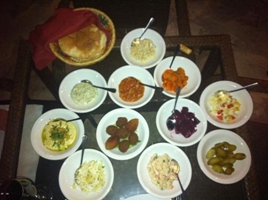 Delicious meza salads at the nearby Philadelphia Restaurant

So when I arrived at the office in the morning from Tel Aviv, in a taxi/sherut driven as usual by a Palestinian taxi driver from East Jerusalem, I was greeted by the news of the morning massacre. Apparently carried out "in revenge" for the general Palestinian belief that the East Jerusalem bus driver found hanging in his bus was not a suicide, as the Israeli authorities claim, but rather a murder by Jewish right-wing extremists.

The Israeli government has made a point of circulating the horrific images of the murdered praying Jews at the synagogue to try to emphasize the cruelty of the act. Well a Palestinian colleague showed me the images that are circulating among their community on Facebook and other social media. Images of the bus driver, with bruises on his body. Images of a right wing Jewish activist with a sign behind him which says Kahane Tzadak (Kahane was right) while holding a hangman's noose with a big smile. And a video showing Israeli policemen pushing Palestinian women and preventing them from entering the Al-Aksa Mosque to pray. This is considered a tremendous insult, because only Israeli female soldiers are supposed to touch Palestinian women.

Yesterday I participated in a conference at Hadassah College in West Jerusalem on American politics, and U.S. Ambassador Daniel (Dan) Shapiro who spoke in the session before me understandably condemned the morning atrocity as "pure evil". And he added that this was a "new low in the history of the conflict", perhaps preferring not to mention a similar atrocity against Muslims praying in Hebron that was carried out by Israeli right-wing settler Baruch Goldstein in the Tomb of the Patriarchs in 1994. Are Israelis and Palestinians competing with each other over who can carry out the worst atrocities? 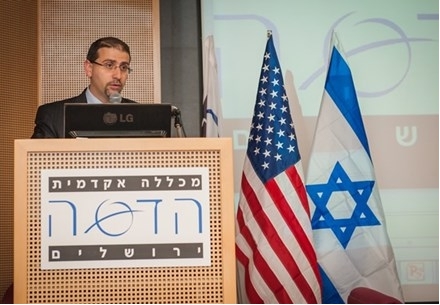 The terrible irony of the morning attack at the Har Nof Synagogue is that the community of ultra-Orthodox Jews there are not settlers, and are totally opposed to the idea of Jews going to pray on the Temple Mount/Haram Al-Sharif, one of the primary causes of anxiety and agitation both among the Palestinians and in the Muslim Arab world in general. One of victims, Rabbi Moshe Twersky, was the grandson of the leading liberal light of modern Orthodoxy, Rabbi Joseph Soloveitchik.

Where is the horizon of hope?

Prime Minister Netanyahu's response to the crisis has been only to call for tougher measures against the Palestinians in East Jerusalem, and to blame Prime Minister Abbas for incitement, despite the fact that Shin Bet General Security Services Chief Yoram Cohen says clearly that "Abu Mazen (Abbas) is not interested in terror, is not leading (his people) to terror, nor is he doing so 'under the table.'" Another response is to destroy the homes of the families of the two terrorists, despite the fact that an IDF study group came to the conclusion that such a policy is not effective, and only creates more hatred. Abbas even went against the stream of his society looking for "victories" and revenge by condemning the murderous attack, but the Palestinian Authority is not allowed to function in East Jerusalem to try to calm the situation, ever since Faisal Husseini passed away and the Orient House was shut down in by then Prime Minister Ariel Sharon in 1991. 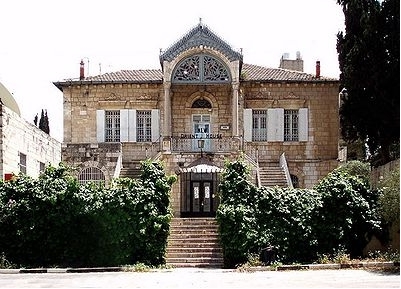 The Orient House in East Jerusalem

The one thing that Netanyahu doesn't do is to provide a horizon for hope for the Jewish and Palestinian residents of the city. Where is the plan to invest in the infrastructure of deprived Palestinian East Jerusalem, to provide hope and economic security to the Palestinian residents, particularly the younger generation? Where is the plan for a future viable West and East Jerusalem? The supposedly "united city" is more divided than ever.

Waiting for new Israeli and Palestinian visionary leaders to emerge

Through all of this craziness and lack of vision, there is a little courtyard off A-Zahara Street near the famed Philadelphia Restaurant which used to be teeming with Israeli visitors, not far from the location of the Mandelbaum Gate which used to divide West and East Jerusalem between 1949 and 1967, an initiative called the Palestinian Art Court - al Hoash is trying to develop a sense of local historical pride. Boris Schatz, the founder of the Betzalel Art School in West Jerusalem would have understood what they are doing, and probably lent a helping hand.

Bloodstained Jerusalem is waiting for new visionary leaders to emerge, both in Israel and in Palestine, to save the soul of the city.

This article originally appeared in The Times of Israel:http://blogs.timesofisrael.com/the-view-from-east-jerusalem/