Prime Minister Netanyahu seems to think that the deal between the global powers and Iran is “the end of the world.” What we are actually witnessing however is the failure of Netanyahu’s gvalt policy, and the triumph of President Obama’s policy of hope.

What is gvalt asked Lizzie, a bright Australian master’s student in Middle Eastern studies intern in the PIJ office? Well, essentially it’s a Yiddish phrase – “Interjection oy gevalt. “Oh, God!” uh-oh!, “woe is me!”, according to wiktionary.org. When people say that Netanyahu ran agvalt campaign in the last elections, they mean that it was an alarmist campaign, based on fanning the flames of fear. Netanyahu’s entire political career has been based on fear-mongering.

While the election and reelection of President Obama was based upon the politics of hope — “Yes we can.” That’s why he was prematurely awarded the Nobel Peace Prize in 2009. Because he promised a politics of hope based upon international cooperation, and because he was not George Bush who unilaterally initiated a disastrous war in Iraq based on false premises, costing the lives of hundreds of thousands of people that changed the balance of power in favor of Iran, while at the same time “leading” the American economy to the brink of catastrophe. 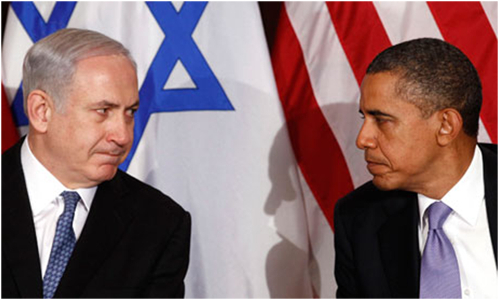 So now what we are seeing is Netanyahu against the world. Netanyahu was nurtured in a home dominated by his father, the late Prof. Benzion Netanyahu, whose analysis of the Spanish Inquisition led him to conclude that no matter what we, the Jews and the Israelis do, the whole world will continue to be against us, and we can only rely on ourselves.

This is actually an extremely anti-Zionist approach. The founding fathers of Zionism, from Herzl to Weizmann to Ben-Gurion, all understood the importance of creating alliances with global powers. Herzl sought support from the German Emperor and the Turkish Sultan, Weizmann got support from the British – the Balfour Declaration – and Ben-Gurion support from the necessary two-thirds majority of the fledgling UN for the Partition Plan, from the U.S. for recognition, from the Soviet Union for arms in 1948, and from Germany for the reparations which enabled Israel’s economy to absorb the immigration of Holocaust survivors from Eastern Europe and the mass immigration from North Africa and the Middle East. 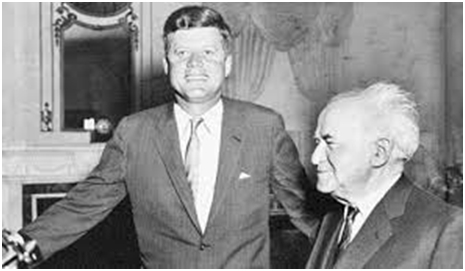 Ben-Gurion, who believe in the importance of alliances with global powers, with President Kennedy

And now, the global powers, led by President Obama, believe that the agreement that was signed in Vienna earlier this week, after almost two years of intensive negotiations, is the best way to prevent Iran from gaining nuclear weapons, a goal which they all agree is important, and a goal which is clearly in Israel’s interest as well.

Convincing explanations for why it’s a good deal

Good and convincing explanations for why this was the best deal possible, and why it will achieve its stated goals, were provided by both the American government, and also from an Israeli perspective by security policy analyst Avishay Ben Sasson-Gordis of the Molad Center for the Renewal of Israeli Democracy in his article “Why the Nuclear Deal is Good for Israel”. And the Policy Committee of the Israel Peace NGO Forum, whose members include many prominent academics, civil society activists and veteran diplomats, has welcomed the deal with a statement which begins with the following paragraph:

The Policy Committee of the Israeli Peace NGO Forum welcomes the nuclear agreement with Iran, which uses diplomacy rather than war as the preferred strategy for the resolution of conflicts.

The statement goes on to emphasize that among the advantages of the agreement are:

* Preventing the possibility that Iran can develop nuclear weapons for 10 years, and the weakening of its ability to do so afterwards;
* Integrating Iran into the global economy, strengthening its motivation and interest to moderate its regime;
* Providing international and pan-Arab legitimacy for integrating Iran into the struggle against the Islamic State (ISIS).

UK Foreign Secretary Phillip Hammond says that Israel (i.e. the Israeli government) prefers “a permanent state of conflict” with Iran to any deal, a statement which was echoed by his colleagues from Germany and France. Does Netanyahu really think that he can go against the entire international community, with the aid of his Republican allies in the U.S., who have no chance to overturn a presidential veto of any obstructionist resolution that they may pass?

President Obama, backed by Secretary of State John Kerry and very importantly the highly knowledgeable Secretary of Energy Dr. Ernest Moniz who was intimately involved in the negotiations, all say that this is the best deal that was possible, and that it “prevents war in the Middle East’ (Obama) and that no one has offered any credible alternative (Kerry). And Kerry added, the deal is not “a question of trust…but of verification and intrusive inspections.” And any Iranian violations will lead to a “snap-back” of the sanctions regime. 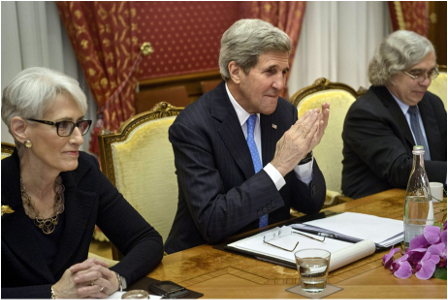 Critics say that the deal does not confront Iran’s support for Hezbollah, Hamas and other destructive forces. True, but the purpose of this deal is to prevent Iran from gaining nuclear weapons. That does not mean that the struggle to contain Iran’s problematic policies in the Middle East does not continue.

The deal with Iran clearly creates opportunities on this front as well. Even Netanyahu has suggested that there are new opportunities for regional security cooperation in the Middle East, given the shared opposition of Israel and the moderate Arab states to Islamic fundamentalism as represented by the Islamic State and Al-Qaeda, and shared concerns about Iran’s regional hegemonic ambitions.

However the key to progress on the regional security front would be an Israeli readiness to engage with the Saudi/Arab Peace Initiative, which promises Israel recognition, normalized relations and peace with the entire region, on condition that a Palestinian state will be established in the West Bank, Gaza and East Jerusalem, with mutually agreed upon land swaps, alongside the State of Israel. In other words, there is no possibility of moving forward on that front without an Israeli readiness to seriously engage in a realistic quest for a resolution of the Israeli-Palestinian conflict.

For this to happen, Netanyahu would have to replace his gevalt politics with a politics of hope. Is it totally inconceivable that he would express a readiness to engage with the Egypt, Saudi Arabia and the Arab League in discussions based upon the Arab Peace Initiative? And instead of a zero sum game politics of doom with the Iranian leadership, why not try challenging the Iranians with an Israeli readiness to engage, both the Iranian leadership and the Iranian people in general, in building a new Middle East for the sake of all of its peoples? 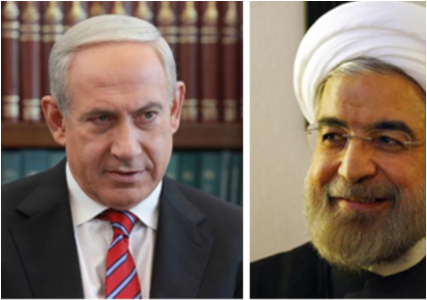 Can Prime Minister Netanyahu reach out to President Rouhani?

Is he capable of making this change? Time will tell. And the clock is ticking. There are alternative Israeli leaders who are ready to do so, waiting in the wings.

This article originally appeared in The Times of Israelhttp://blogs.timesofisrael.com/the-iran-deal-gvalt-vs-hope/