Roundtable Discussions   |  Book Reviews   |  Culture, Literature and Arts  |  Economics   |  Policy Papers  |  Interviews  |
Rabin's Legacy: It's up to us
By Hillel Schenker
By

Heading out to Rabin Square on Saturday night, I was haunted by images of walking the same path 20 years ago, from Old Tel Aviv, down King George Street, to what was then called Kings of Israel Square. Then it was for a rally under the slogan “No to Violence, Yes to Peace”, organized in the height of the tense struggle over the attempt to achieve peace that began with the signing of the Oslo Accords. An agreement whose foundation was mutual recognition between the State of Israel and the Palestine Liberation Organization (PLO). Prime Minister Yitzhak Rabin had been demonized by the right, depicted wearing either a Nazi uniform or a Palestinian keffiyeh, extremist rabbis were declaring that the he could be killed for daring to support territorial compromise with our neighbors and hate filled demonstrators were shouting outside his Ramat Aviv home every evening.

If we organize it, they will come

Rabin had been skeptical about a rally — afraid that the people wouldn’t come. But they came — if we organize it, they will come said Tel Aviv Mayor Shlomo Lahat and the other organizers. The Prime Minister was overwhelmed by this show of public support for his policies, and when he spoke, I remember saying to my friends that “his speech sounds much more confident and flowing then it usually is”, undoubtedly fueled by the success of the rally, which imbued him with a new sense of energy and confidence.

We also knew that security sharpshooters were based on the roofs around the square, just in case, I distinctly remember glancing upwards periodically. Then came the singing of Shir La’Shalom, the Song of Peace, and the slow descent down the stairs towards his meeting with the assassin waiting unnoticed down below.

Saturday night the rally opened with a beautiful rendition of Shir La’Shalom, this time by Ninet Tayeb, rather than Miri Aloni, And together with many other people around me, I joined in, knowing all the words. Just as I had when asked by my commander to lead the singing of the song with my fellow IDF soldiers during the long grueling treks in basic training back in 1970 in the West Bank, despite the ban issued by Central Command Head General Rehavam Ze’evi who claimed that the song was demoralizing for the soldiers because it was “anti-war”.

Once again, I looked at the rooftops surrounding what is now known as Rabin Square, and knew that security sharpshooters were up there overlooking the large crowd. This time there was also a helicopter circling over the crowd for the entire two and a half hours of the rally. And there were bullet-proof glass barriers protecting the speakers on stage. 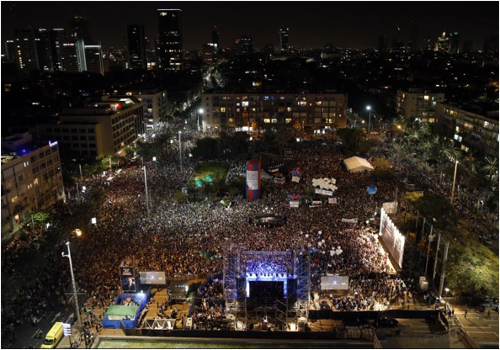 Time to stand up and be counted

Since the rally was broadcast live on TV, I could have watched it from the comfort of my home. But there are times that you have to stand up and be counted. And every year since those three bullets rang out back in 1995 has been one of those times.

A rally about a political assassination without politics?

This year the organizers wanted to create an a-political rally, built around a consensus of defense of democracy and opposition to racism and violence. That was the justification for their outrageous decision not to invite 92-year-old former President Shimon Peres to speak. He would be too political, would dare to mention the word peace. But how can you have a 20th anniversary memorial rally for a slain leader, killed at the end of a demonstration “Against Violence, for Peace”, without the peace side of the equation? Particularly since the murderer, Yigal Amir, clearly stated that his goal was to kill the peace process. Despite this insult, Peres agreed to come, and to sit on the platform alongside current President Reuven Rivlin, who gave a very strong opening presentation, however without the word peace.

Fortunately, there was President Bill Clinton, who gave the speech that Peres would have given, and even more effectively. The TV camera that showed the speeches on screens spread throughout the square periodically focused on Peres and Rivlin while Clinton was talking, showing Peres applauding various lines, while Rivlin sat there stoically, trying to look above the fray. President Barak Obama’s prerecorded video presentation followed strongly in Clinton’s footsteps. 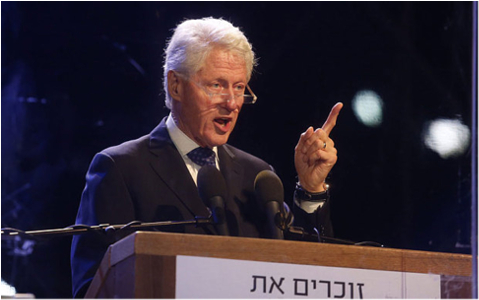 President Clinton speaking to the rally

I would recommend that for future commemorations of Rabin’s assassination, Clinton and Obama’s appraisals of the slain leader and ongoing commitment to his vision should be required reading for all Israeli students, and for people everywhere who want to understand Rabin’s legacy.

Clinton: “Rabin refused to give up on the dream of peace when faced by violence”

Clinton compared Rabin to the late Egyptian president Anwar Sadat and to Mahatma Gandhi, both of whom were killed by fellow countrymen for pursuing policies their murderers opposed. Clinton said that Rabin told him that “we and the Palestinians are fated to live in this same land together.” And he told him “I don’t want to see Israel reach a crossroads where it will have chose between being a Jewish or a democratic state.” Clinton added that “the most important thing I learned from him is that Rabin refused to give up on the dream of peace when faced by violence.” And the President said he was right. “You (the Israelis) have to share your future with your neighbors. Tonight, when you go back home, your next steps will determine whether Rabin’s way has won. This will only happen when you agree with him that the path of peace is less dangerous than the path of war for Israel.”

Obama: “The only real solution — two states for two people” 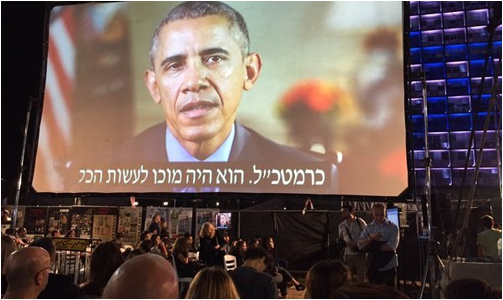 The Israeli government usually expects foreign leaders to visit the Yad Vashem Holocaust Memorial and the Western Wall. However, I was particularly impressed by the fact that both Clinton and Obama made a reference to the fact that they went to Mount Herzl, to pay tribute alongside the graves of Yitzhak and Leah Rabin. By this common act, the two presidents were paying tribute to Herzl, the founder of modern Zionism and to Israel’s right to exist, and to Rabin’s legacy of security and peace, of “fighting terror as if there were no negotiations, and of negotiating as if there were no terror”. Which contrasts so strongly with Prime Minister Netanyahu’s recent statement that “we will always have to live by the sword”.

It is shocking to me that there were factors among the organizers who wanted to cancel both Clinton and Obama’s speech, because it was clear that they would both be “political”. This was clearly too much for Rabin’s daughter Dalia Rabin, Chair of the Yitzhak Rabin Center, one of the co-organizers, who put her foot down and insisted that they be allowed to speak.

Another speaker who did not play according to the a-political rules was Yonatan Ben-Artzi, Rabin’s grandson. He declared that Israel should take the initiative, and “immediately recognize a Palestinian state, without preconditions. It’s not a matter of right or left. It’s our future. If we don’t make a change, we won’t be able to exist as a democracy; we will be forced into inequality and revoking the rights of the other.” 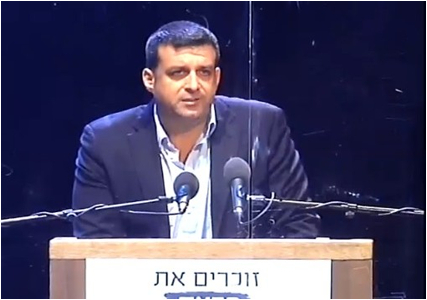 I left the square as the rally drew to a close, and caught a cab at nearby Masaryk Square. The taxi driver said “you were at the rally?” I said yes. “You should know,” he said, “Rabin was a great man, a patriot, a general, a leader, and his murder also murdered peace, but I don’t think we should continue dwelling on the past. We have to look towards the future.” And I said while it’s important to remember Rabin’s legacy, people at the rally also looked towards the future. “That’s important” he said. “We have to separate from the Palestinians, we should also give them East Jerusalem, what do we need it for? And if it were up to me, I would have no problem visiting the Kotel (Western Wall) with a visa. How many times do I go there, once every 10 or 20 years?” Well I said, I have no problem with what he said, though I thought that giving up the Western Wall was a little too much, realizing that it is important to many Jews. And I realized that the driver was unknowingly echoing Rabin’s statement when he first entered politics that he would have no problem visiting Gush Etzion in the West Bank with a visa.

The next day, the rally was the lead story in the three major Hebrew language dailies, Yediot Ahronot, Ma’ariv and Ha’aretz. Only the freebie Yisrael Hayom followed the line of its master Sheldon Adelson and led with a story about the crash of the Russian plane in Sinai, downplaying the importance of the rally.

It’s up to us, with a lot of help from our friends

The bottom line was left to President Clinton, who said “He gave his life so that you could live in peace…Now it is up to you. All of you must decide when you leave tonight how to finish the last chapter of this story.”

In other words, the final definition of Rabin’s legacy is up to us, with a lot of help from our friends.

This article originally appeared in The Times of Israel:http://blogs.timesofisrael.com/rabins-legacy-its-up-to-us/