There is absolutely no justification for the current policy being used on the Gaza border.

Here in Israel/Palestine, we have just lived through some of the most dramatic days in recent memory. The calendar said it all: May 12 was the deadline for President Donald Trump to declare whether the American government was remaining committed to the Iran nuclear deal; May 14 was set for the transfer of the American embassy to Jerusalem; and May 15 was Nakba Day — the day the Palestinians mark the anniversary of the establishment of the state of Israel in 1948 and their nakba (disaster or catastrophe). May 15 was also going to be the climax of the six-week-long March of Return, a mass Palestinian protest along the Gaza border.

Those dry dates and figures turned a ghastly red when 61 Palestinians were killed and about 2,400 injured by Israel Defense Force (IDF) soldiers on May 14 on the Gaza border. Israel’s government claims that the policy of using live fire is justified by the need to protect its sovereign borders from being violated. The same justification was used on March 30 — the beginning of the March of Return — when some 100 IDF snipers killed 31 protesters.

How many IDF soldiers and Israeli civilians have been killed since March 30 along the Gaza border? None.

There was no clear and present danger to the lives of the young soldiers stationed on the Israeli side of the border. According to international law, Israel has a right to defend itself when under attack, as it demonstrated when the Egyptian and Syrian armies attacked Israel on October 5, 1973. I know because I was there, called up on that same day to serve for the next 8 months in the IDF’s Combat Engineering Corps on the northern front.

I also know that there is absolutely no justification for the current policy being used on the Gaza border. There are many techniques for crowd dispersal — smoke, water cannons, skunk spray. These have been used by Israeli police to disperse Jewish ultra-Orthodox demonstrators when they try to block the roads in protest against being drafted into the army or for what they see as violations of the Sabbath. These techniques have also been used against Palestinian and joint Israeli-Palestinian non-violent demonstrations against the expropriation of Palestinian lands in the occupied West Bank.

Although Israel unilaterally withdrew from the Gaza Strip in 2005, the siege continued, with all movement to and from the area remaining under Israeli control. There is a humanitarian crisis in Gaza. The economy is in shambles, the water is polluted, there are barely four hours of electricity available a day, unemployment is rampant — 60% among the younger generation — and the UN says that the strip will be “uninhabitable by 2020.”

Egypt also shares responsibility for the situation because of its continued siege of the southern border between Sinai and Gaza. And of course Hamas, which was elected in 2006 under the slogan of “Reform and Change” also bears a large part of the responsibility for the suffering of the Gazans because of its corrupt self-serving behavior, as does the Palestinian Authority led by President Mahmoud Abbas, which discriminates against Gazans in the context of the struggle between West Bank-headquartered Fatah and Hamas.

The people of Gaza are desperate. Their desperation was the catalyst for the March of Return along the border with Israel. This primarily non-violent initiative did not begin with Hamas, although it took advantage of the opportunity and tried try to direct the protest.

And where is the “international community”? Palestinians feel that their Arab brothers have abandoned them, preferring to sell oil to and buy arms from the Americans. And the European Union? The Policy Working Group-Israel consisting of about 25 veteran ambassadors, senior academics and civil society activists working for a two-state solution, chaired by Ambassador (Ret.) Ilan Baruch, have called upon the EU “to immediately dispatch staff members to the Gaza border to monitor the situation. It is possible that their very presence will have an immediate impact by reducing the level of violence on the ground.” So far there’s been no response.

Prime Minister Benjamin Netanyahu declared that the transfer of the US embassy to Jerusalem was “a great day for peace.” Actually, all the transfer consisted of was the placing an “American Embassy” sign on the US consulate building in the remote Arnona neighborhood of West Jerusalem — a technique that Trump has used very often in his career, placing signs with his name on buildings around the world. The “move” consisted of the opening of a small office for Ambassador David Friedman and an assistant in the building, while the rest of the embassy staff remain in Tel Aviv.

But, symbolically, this was enough for the Palestinians to feel that the Americans can no longer be considered a legitimate facilitator for Israeli-Palestinian peace. Perhaps it was not “a great day for peace,” but it was definitely a great day for right-wing Israelis who don’t want to see a two-state solution with a capital in West Jerusalem for Israel and in East Jerusalem for a future Palestinian state. And it was also a great day for Trump’s extreme evangelical Christian supporters who want to see all the Jews return to a Greater Israel as a prelude for the final battle at Armageddon, the conversion of the Jews and the 3rd coming of Christ.

“We Are Not Your Toy”

On Tuesday, May 15th, I was at a demonstration opposite the Likud party headquarters at Jabotinsky House in Tel Aviv, organized by all segments of the Israeli peace movement. About 500 demonstrators blocked the main thoroughfare, shouting slogans and carrying signs which rhyme in Hebrew like “The People demand/Stop the firing”; “In the North and in the South/The People want a Peace Agreement” (a reference to the tensions on the northern border with Syria where the Israelis face the Iranians); “Democracy is not built on the bodies of demonstrators”; “Enough to killing/Enough to mourning/Peace is worth more than all”; “Without fear/ Without despair/We will end the Occupation”; “Children in Gaza and Sderot/Both want to Live”; and “Resign Netanyahu/Peace is worth more than you are.”

The most original sign was the one that read “Trump, Bibi/We Are Not Your Toy.” This was a play on the refrain of Netta Barzilai’s song “Toy” that won Israel the Eurovision Song Contest on May 12, watched by over a billion people around the world. The song calls for the empowerment of women and people who are different, inspired by the #MeToo campaign. The song and the sign are also a message to Trump and Netanyahu that they may be riding high today, but there are subterranean streams that may eventually bring both of them down. 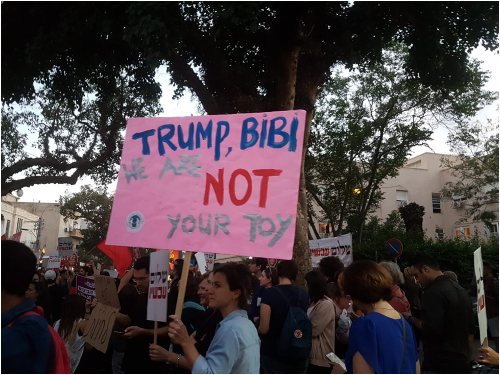 “Trump, Bibi, We Are Not Your Toy”: (Photo: Hillel Schenker)

This article was originally published at Fair Observer:https://www.fairobserver.com/region/middle_east_north_africa/gaza-violence-us-embassy-jerusalem-trump-netanyahu-middle-east-news-13219/